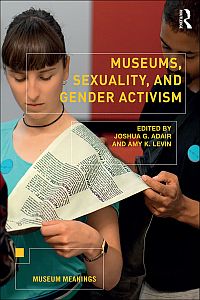 Since publications on museums, sexuality and gender activism are rare, as a curator I am naturally very grateful to the authors for venturing in these sensitive and topical issues of identity, representation and activism in museums. Why gender activism? To cite the authors, because "Activism is the engine that animates change - especially in the arena of gender, sexuality and museums" (292). Books such as this, edited by Joshua G. Adair and Amy K. Levin, have the potential to contribute to change that still has to affect museums worldwide.

The volume discusses the representation and integration of LGBTQ+ people (lesbian, gay, bisexual, transgender, queer, and + used to include all further unspecified communities), cisgender women and non-binary individuals and embraces a multidisciplinary and intersectional approach. It is structured in five parts that cover several themes and include theoretical reflections and practical examples. The topics include transgender representation and activism in the museum; display practices related to two-spirit people and indigeneity; the politics of exhibiting third genders; gender and sexuality in heritage sites; temporary and permanent exhibitions on gender, sexuality and HIV/AIDS, and interventions to increase queer visibility and inclusion in public spaces of display.

The real strength of the book is its polyvocality achieving its goal to include the voices of as many participants in the discourse as possible in collecting articles from artists, curators, scholars and community representatives. The editors underline their openness to others' voices, experiences, and realities, since the very nature of their work and the understanding of museums demands plural perspectives (5), while acknowledging that the voices represented are just a few of those they would have wished to include (Adair and Levin point out that several non-Western or minority artists and scholars declined to participate, or requested payments for which the book project's limited budget did not allow).

The book is designed to supplement Amy K. Levin's essay collection Gender, Sexuality and Museums. A Routledge Reader of 2010, by including recent research and addressing some of the gaps in the previous work (5). Based on this premise, I had expected to see a stronger focus on LGBTQ+ groups, as well as on questions of gender and activism. To me, the three chapters on "Unruly Women" in the section "Acts of Resistance" are a surprising inclusion in the volume. In the last ten years, much work has been done concerning the inclusion of (cisgender) women's voices into GLAM institutions (Galleries, Libraries, Archives, and Museums), especially since the #MeToo movement. While it is true that the female body and its representation in museums is still a problematic issue, the emphasis on cisgender women's issues in a book that is mainly concerned with sexuality and gender activism remains puzzling.

The same cannot be said about the inclusion of LGBTQ+ communities in the museum: many visitors still struggle to see themselves represented in certain institutions and witness a reproduction of dominant ideologies in exhibitions and other kinds of public displays of art and material culture. The scholarly work of Sara Ahmed on queer phenomenology [1], which is also acknowledged in the book, can be used to explain one of the possible reasons why. According to Ahmed, heterosexuality functions as "an invisible background and normativity shaped through the endless repetition of an image; ultimately, familiarity ensures us in a heteronormative reality structured around binary constructions of sex and gender" (279). Museum displays and exhibitions also actively and passively reproduce such repetitions of standardized narratives and heteronormativity. In this regard, Nikki Sullivan and Craig Middleton's article points out that it remains difficult to explain why, "despite at least two decades of talking about inclusion, non-hierarchical co-creation, polyvocality, social justice, and so on, museums in general continue to attract only a very small proportion of the population; or why "non-mainstream" genders and sexualities remain largely absent" (35).

This publication offers possible answers to the question of what museums and galleries can do to attract under-represented audiences through curatorial strategies and exhibition practices. The chapters present best-practice examples that range from working groups to queer guided tours by the Victoria & Albert Museum in London, or glossaries that can be read while wearing them as a scarf or a coat in the Van Abbemuseum in Eindhoven. Some chapters identify examples of transgender, gender fluidity, nonbinary gender, and queer activism in galleries and museums. Although several contributions focus on locations outside the US and Europe that are addressing the perspectives of racial and ethnic minorities, most best-practice examples are drawn from Euro-American institutions and inspiring examples from other countries are missing. As the Archives, Libraries, Museums and Special Collections Conference in Berlin in 2019 dedicated to the subject "Queering Memory" has shown, there are several examples worth mentioning.

The perspective of the editors is to see museums not only as major sites for the production of knowledge, but also as "Work in Progress" that is constantly evolving. This understanding is as worthy of support as their claim that "we must remain active, alert, and open to a way of thinking and working that does not clamor for conclusion" (5). This is very much in line with the points made by Anne Rensma, Daniel Neugebauer and Olle Lundin in their chapter on the "Queering the Collection" project in the Dutch Van Abbemuseum. Based on José Esteban Muñoz's theories of disidentification [2], they analyse how "the museum is potentially a site for negotiating new, more expansive views of identity" and suggest that "A requisite for these negotiations is an understanding of the ways in which binary notions of perfection and failure marginalize certain identities and bodies" (205).

A first step in this direction is transparency, as Amanda K. Figueroa stresses in her contribution on "Chicana Feminism, Anzalduian Borderland Practices, and Critiques of Museology". She writes that only a complete visibility of power structures allows for a change in the knowledge and culture production work of the museum (26). She offers in her article new approaches to museology through the lens of Chicana feminism, which analyses and criticizes among others the visible and invisible hierarchies of power that exist within an institution and its networks.

The book has only 20 images. Reading the volume as an eBook on a tablet allows for relatively quick online searches for key visual references, but for readers of printed copies the small number of illustrations might be more disruptive to the reading flow.

To sum up, the book is a precious companion that offers valuable insights into what has happened and what is happening in the field of sexuality and gender activism in museums. It contains many resources in its comprehensive bibliography and weblinks (to articles, projects, artists, archives. etc.) and is a useful tool for those wishing to immerse themselves in the theme. With Museums, Sexuality and Gender Activism, editors and authors are filling the gap between academic and activist writing and offering scholarly insight, analytical tools, inspiration and concrete examples not only to students and scholars, but also to practitioners working in museums, galleries, archives and libraries.

[2] José Esteban Muñoz: Disidentifications. Queers of Color and the Performance of Politics, Minneapolis 1999.