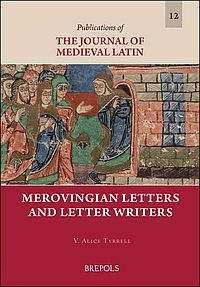 In recent decades the Merovingian period has emerged as a vital and thriving period worthy of study in its own right. A great many monographs, edited volumes and articles have shed new light on the Merovingian achievements, political, social and cultural. We now have a clearer impression than ever that the Merovingian period was not just one of fratricidal civil wars followed by a slow decline under rois fainéants. Rather, it was a time of erudition, learning and cultural development.

Merovingian Letters and Letter Writers, Tyrrell's first monograph, is an aid to illuminating the culture of the Merovingians. Covering a chronological period of more than 250 years, and exploring the contents of over 600 letters, Tyrrell's aim is to show how much can be gained from utilizing sources other than those which provide narratives of the period. Despite the title, it is worth noting that Tyrrell examines sources outside the conventional chronological limits of the Merovingian period, including letters by fifth-century Gallo-Roman authors and by eighth-century Anglo-Saxon authors.

Following an Introduction that briefly summarizes the various letter collections edited in the Monumenta Germaniae Historica, the book is divided into seven chapters, which cover three broad themes. Chapters 1-3 (1-18, 19-50, 51-92), which proceed chronologically, address the subject of amicitia networks from the end of the fifth to the end of the eighth century. This allows Tyrrell to demonstrate trends over time, although the diminishing number of authors and surviving letters as the period progresses limits this somewhat. The remaining chapters examine particular themes across the entire chronological scope of the book. Chapters 4 (93-129) and 5 (130-162) focus on letters to and from kings and popes, and women's letters respectively. Chapters 6 (163-196) and 7 (197-218) provide supplementary information on the subjects of those tasked with bearing letters and the gifts that accompanied letters, and the use of Biblical language in Merovingian letters. Following a short conclusion (219-220) are an appendix of Biblical quotations (221-226) and a lengthy appendix providing summaries of most of the letters mentioned in the preceding text (227-356).

As could be expected for a book of this scope, Merovingian Letters and Letter Writers addresses both over-arching themes and more specific case studies. For the purpose of this review I shall provide one example of each that I found particularly illuminating and well handled. In Chapter 1 Tyrrell discusses the impact that the zealous and reforming attitudes of Caesarius of Arles and Julius Pomerius had on letter writing (8-18), reducing the use of the kind of florid and emotional language found in the letters of earlier authors, and facilitating a more straight-forward and "business-like" approach. While some of the surviving early and mid-sixth century letters certainly demonstrate a more subdued style of language that may have been influenced by these authors, their contents are still often friendly in tone and not solely concerned with matters of ecclesiastical office holding and religious practice. Admittedly, this is one of many examples where the author concedes that the lack of surviving material makes firm conclusions difficult, but the letters examined in later chapters suggest that Tyrrell is correct to suggest that the concept of amicitia remained important throughout the Merovingian period.

In Chapter 3, meanwhile, Tyrrell tackles the tricky subject of the letter exchange between Chrodobert of Tours and Importunus of Paris (66-81). Since this exchange has vexed generations of scholars, Tyrrell is to be congratulated for doing so. There have been several recent articles on these letters, but it is useful to see them considered in the wider context of Merovingian letter writing culture, and considered as representative of an amicitia network. Unfortunately, Tyrrell does not come down firmly in favour of an interpretation of the exchange as a humorous one between friends or as a case of former friendship turned ugly. After considering the evidence she presents, though, I believe a case has been made for the former, especially when one takes the involvement of a community of nuns into account. The presentation of a complete translation of the letters by way of a working edition is particularly welcome, and will hopefully encourage more scholars to examine this bizarre and fascinating moment in Merovingian micro-history.

One criticism that could be levelled at the book, though, is that arguments are often not developed as fully as one might hope. The author tends to blame a lack of surviving source material for this, which may seem odd in a book that deploys over 600 letters from the period: it is perhaps an issue with the nature of the surviving material rather than the quantity. While the letters of Sidonius Apollinaris, Venantius Fortunatus and Boniface, for example, survive in extensive, if by no means complete collections, the letter collections of other authors are rather more fragmentary, or even isolated from almost all context. In such cases it is difficult to know how representative the surviving letters are, and thus drawing wide-ranging conclusions becomes a risky proposition. Nevertheless, it would have been nice to have a clearer idea of the author's own opinions on some of the issues explored: what Tyrrell provides is often too reliant on existing secondary literature.

Despite only being the direct subject of three chapters, the idea of amicitia networks somewhat dominates the book. Indeed, letters written by members of these networks are the standard by which other letters and their writers are judged: as we are reminded several times, kings, popes and women were not part of amicitia networks. Yet despite this authorial insistence, the reader will get the impression that there were in fact many levels of networks in play between Merovingian correspondents, all of which interweaved in a variety of ways depending on the context of the individual letter. The letters written by Fortunatus to kings or by Boniface to popes are just as revealing as those each wrote to their friends.

The statement that Merovingian letters have been neglected by historians of the period is made by the author several times over the course of this monograph. While one may debate exactly how neglected Merovingian letters are as a source group, most scholars would concede that letters have not been utilized to the same extent as the historical triumvirate of Gregory of Tours's Histories, Fredegar's Chronicle or the Liber Historiae Francorum, nor the contemporary hagiographical texts. Tyrrell's monograph, then, is a welcome prompt for Merovingianists of all levels to (re-)consider what more than two and a half centuries' worth of letters may have to offer.

Yet, ultimately, the nature of the book as more of a summary of material than a source of novel argumentation will mean that it is most useful to postgraduates and upper level undergraduates seeking to go beyond the historical narratives. For this target audience, though, the book's importance cannot be overstated. Tyrrell provides a lucid and clear overview of a vast array of letters, many of which are only available in Latin. In this regard, her several translations - mostly partial - and the appendix summarizing the individual letters will be welcomed by those who want to use these letters but may not yet have the language skills to tackle the MGH editions. The accomplishment of the book is thus not so much in providing new interpretation of the Merovingian period, but rather in facilitating further study of it.