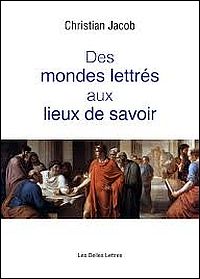 This book is a compendium of Jacob's papers dealing with all possible aspects of the intellectual process that culminates in knowledge, written from 2001 to 2018. They constitute a good account of Jacob's dedication, and great contribution, to a topic that he started to explore in the nineties following the path of the pioneering and monumental work, Lieux de mémoire (1984-1992), directed by Pierre Nora (122-3). Jacob has dedicated his personal research to this topic, but has also established a research group that has made many advances and is still very active nowadays in the French scholar milieu, as the bibliography of the book confirms. Following Nora's aim, Jacob's school approaches the research with an interdisciplinary and comparative method. This sample of papers does not constitute a research on a specific topic in the field, but a reflection of all elements involved in the process: intellectual, physical, material, spatial or chronological. Being the work of a Hellenist, numerous mentions and even especial chapters are reserved for Greek and Roman authors and institutions, but the whole book can and shall be read by everyone interested in this human process as a universal phenomenon. Comparison with eastern cultures, especially India and China, is frequent and very stimulating, as well as the full chronological development of the knowledge process until our days, when the digital world has introduced changes that are even modifying our way of thinking (alluded to in the whole book, but goal of the final chapter).

In my opinion, starting the volume with an outstanding first section (out of four) dedicated to the Great Library of Alexandria and other libraries from Antiquity, is a success. Jacob reveals a true philological-historical methodology, attempting to define, with the fragmentary sources available, what constitutes a library, to situate it in its political, social and cultural context, to reconstruct its nature, function, physical and material particularities, its role in the history of literacy, the book and ancient literature, its function in textual transmission, and also the ample world surrounding it: the sphere of written text, the emergence of readership, researchers, students, writers or cultivated amateurs. Also analyzed are the foundation of the library, the difference between book collection and physical place, or the difference between the book as an object of knowledge and as a valuable. To this end, he often appeals to Greek terms and very original and acute interpretations of ancient texts, such as the analysis emanating from Book 13 of Strabo's Geographica. This review of the Great Library of Alexandria is the particular review of what the sum of the book is about, and at the same time it is a sample of the author's methodology, which insists on the necessity of conducting specific studies to sustain an investigation as general, comprehensive and interdisciplinary as this one.

If the first section focusses on books and their collections, the second one, titled Mondes Savants and commencing with the figure of Socrates, in turn focusses on the human and geographical networks that constitute knowledge. Inserted here is the introduction to the book Lieux de saviors, edited by the author in 2007, which highlights four phases of research and, to a certain extent, gathers a significant part of the contents treated in the reviewed volume: the formation of intellectual communities, working places, territorial disposition, mobility, and circulation of knowledge. With this approach, and the influence of Anselm Strauss' social worlds concept, and Erwin Goffman and Edward Hall's historic anthropology of social practices, he speaks of the construction of the professional, institutional or social status in the scientific or cultural world, and of the spatiality of knowledge with its points of interaction and performance. Significant relevance is given to the symposium as meeting of wise men, with a rich commentary from this perspective of Plutarch's Table-talk, Aulus Gellius' Attic Nights, and Athenaeus' Deipnosophistae, revising every way in which this type of meeting recuperates, comments, criticizes, adapts, enriches and spreads knowledge. In this section, Jacob also concedes especial attention to the techniques through which knowledge is maintained and reutilized (inventories, files, etc), and to the role of letters as process of creation of knowledge by themselves and as means to reproduce a process of intellectual creation.

The third section, Pratiques lettres, is focused on the text as an intellectual object constructed by agents that secure its fixation, conservation and transmission by way of a series of phases directly conditioned by historically defined cultures; the technical, material and intellectual road that leads to what Jacob outlines, with his characteristic style, as "from the book to the text". Here, he focusses on the medium, its relationship with the text and a given form of writing, its symbolic value, its political function or its relationship with specific institutions, as well as the techniques and diffusion circuits that influence the reproduction processes. A reflection dedicated to the art of reading as an act of freedom because of the selection it implies in every phase is a good example of Jacob's capacity to encompass and elucidate all facets implied in the intellectual process.

The last section, Les gestes de la pensée, opens with several pages dedicated to the hand as instrument of intellect. The rest of the section is dedicated, overall, to the ways in which knowledge is spread, e.g. the importance of question exchange, exemplified with the work Problemata, attributed to Aristotle, where problems are presented as interrogations with their different solutions. Worth highlighting in this final chapter are Jacob's observations on digital humanities and the way in which new technologies adapt to the intellectual process.

Some chapters, due to the fact that they have been written for other works with a different aim, are not completely integrated in the volume. For the same reason, the book, which is quite long, becomes repetitive in many aspects as the reading progresses, and the titles, which are very suggestive, are not always very revealing. Having said this, it is a most erudite, original and stimulating volume, which opens many more unexpected paths in the field of knowledge, and at the same time it is written with such mastery that it is a pleasure to read. The comments of ancient Greek and Roman texts as source for the intellectual process are worth reading for any classicist. They reveal Jacob's specialization, as he himself describes it: grammatical and antiquarian erudition in the Greco-Roman world from the Hellenistic period onwards, a privileged field to observe the circulation and transformation of knowledge.