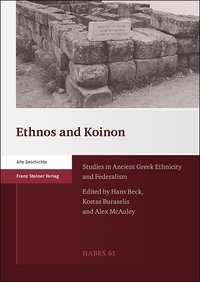 Ethnos and Koinon is a natural continuation to Federalism in Greek Antiquity [1], where the authors identified an open historical problem worth of further investigation, namely how ethnicity and politics intertwine in the development of forms of federal collaboration. Moving forward from the overall view on ancient federalism by many of the same editors and authors, Ethnos and Koinon focuses on a specific subject and thoroughly investigates the relationship between ethnicity and federal institutions.

Modern scholarly research on ancient federalism, as it is well known, has widely discarded the idea of a strict taxonomy between "primitive" ethnic states and "advanced" federal states as two discrete stages of evolution. Over the last decades, ethnicity studies have shed light on the construction of ethnic togetherness and of regional bonds of solidarity, fostered by common descent, as a phenomenon that cannot be confined to the earliest phases of the Greek history. Ethnicity and federalism, on the contrary, appear to dynamically overlap and to affect each other also in relation to later historical stages. The way in which ethnic ties of identity were shaped in antiquity is the subject of a wide range of studies, however the practical role of ethnic togetherness within the political machinery of the Greek federalism has not yet been so extensively addressed, that is until the publication of this welcomed book. All the studies there collected are valuable and worth of interest, nevertheless this review will only take into account the main topics.

A key appeal of this volume lies in an improved understanding on how the "ethnic argument" operated in practice, from time to time, in different geopolitical contexts, and with different modes and outcomes, as opposed to try and develop a theoretical model on the interrelation between ethnicity and federalism. Such a perspective is immediately clear from the organisation itself of the volume into case studies devoted to individual ethnic and/or federal contexts, grouped according to geographical criteria. This rationale can also be appreciated on the stimulating introductory chapter by Emily Mackil. Based on a series of paradigmatic cases, Mackil outlines three primary ways in which the issue of ethnic cohesion appears to be used by Greek communities in relation to political cooperation: 1. ethnic homogeneity can be addressed as the most persuasive claim for political cooperation into a koinon (at the same time, to be allophyloi can be perceived as a main source of disunion); 2. in the course of history, ethnic arguments can be re-invoked and reshaped in response to new political needs; 3. participation and integration into a federal union can be successfully performed also regardless of ethnicity (e.g. on the base of a shared economy, external pressure, the guarantee of equal civic rights and protections, and so on); on the other hand, to be homophyloi is not always a condition capable of preventing secessions or of fostering per se the creation of political unions.

From this introduction, as well as from the analysis provided in the subsequent contributes, there emerges a multifaceted and dynamic interrelation between ethnicity and politics, with regional focus. This reminds scholars of the need of evaluating the effective relevance of "ethnic arguments" for the development of federal structures, always in relation to their functional role within specific political contexts. Forms of political cooperation can also develop beyond a sense of common descent or, sometimes, be even weakened by preexisting ethnic ties. Nonetheless, it emerges clearly how the creation of ethnic bonds solidarity conveyed by religion, myths or common social practices, can never be regarded as redundant or merely fictitious in respect to political practices. Particularly revealing in this regard can be the development of an "emotionally based" federalism in Hellenistic and Roman Boeotia (Angela Ganter), or the high political awareness emerging in the use of Aitolian myths and symbols by member poleis as an expression of different grades of affiliation to the koinon (Claudia Antonetti).

Beyond this overall framework, that applies to the whole volume with remarkable internal consistency, some further noteworthy themes can be identified throughout the collected papers as interpretative keys in the discussion about ethnicity & federalism.

A first theme relates to sources: new insights are given into the mechanisms of interaction among local communities in relation to shared ethnic identity and political participation, with special focus on data derived from archaeology (see Alfonso J. Domínguez on Thesprotia, Margriet J. Haagsma et al. on Achaia Phthiotis, Nikolaos Petrokilos on Lokris), from coins or public seals (esp. in Claudia Antonetti on Aetolia, Catherine Grandjean on Achaia), as well as by the analysis of specific categories of documents (e.g., the Lokrian proxeny decrees by Giovanna Daverio Rocchi or of the Argolic theorodokoi lists by Alex McAuley). Such alternative viewpoints can, in some cases confirm or, otherwise, challenge accepted interpretative patterns. For instance, the analysis of the coin minting production in Achaia by Catherine Grandjean corroborates Rizakis' hypothesis of the synteleia Patrike as an unique district in Achaia (probably acting also as a "monetary district", according to C. J.); and, moreover, it substantiates Polybius' (II. 37) assessment about the unification of weights, measures and coinage as an important federal institution. Differently, in the Lokrian decrees studied by Giovanna Daverio Rocchi, the grant of proxeny appears as a peculiar tool for interstate cooperations in small-scale neighbouring areas, that was equally used by the koinon as much as by the Lokrian poleis with the same objects and purposes, thus being at odds with the normal division of powers in federal states.

Another significant subject, not yet fully addressed, deals with the influence of a community on another, in terms of ethnic identity or development of federal institutions. It is a very prolific subject to explore, on which many of the collected papers provide valuable information, enlightening the different geneses and purposes, as well as the heuristic potential of this kind of interaction (see the comparison between the Achaian and Aitolian federal institutions by Kostas Buraselis, or the analysis on the adoption of the Achaian model for the Lykian koinon in the shade of Rome, by Athanassion Rizakis). Some of the contexts dealt with in the volume make it also clear how, in some cases, the development of a common ethnic distinctiveness was shaped more as a response to external policy pressures, than to internal factors (see, for instance, the construction of an Arkadian national identity in opposition to Thebes studied by Cinzia Bearzot; the enhancement of a "Thessalian identity" by Achaia Phthiotis against Makedonia and Aetolia observed by Margriet J. Haagsma, Laura Surtees, and C. Myles Chykerda).

Ethnicity and politics appear to have combined in a variety of ways, giving rise to different and nuanced forms of federal collaboration, of which this volume provides a rather exhaustive range of examples (especially focuses on this theme are the papers of Albert Schachther Boeotia, of Maria Mili on the Thessalian state, and of Katerina Panagopoulous on the Makedonian ethnos).

Finally, a further theme emerging from this research deals with the role played by the poleis in the relationship between ethnic identity and political participation into a koinon. In the interpretation of such multifaceted interrelation, polis stands in most cases as a pivotal element, capable of shaping forms of cooperation within or beyond bonds of ethnic solidarity (as, respectively, in the case of Argive theoria explored by Alex McAuley and in that of the Euboian union after 196 BC studied by Nikos Giannakopoulos); or instead of undermining the achievement of a full federal integration (see James Roy on the Arkadian poleis or Sheila Ager on the relation between the Achaian koinon and Spartan identity).