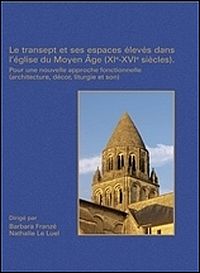 The aim of the publication is to propose a reassessment of the present knowledge on the transept and its "elevated spaces" from the eleventh to the sixteenth centuries, whereby the major part is focused on the central Middle Ages. It wishes to do so by crossing various disciplinary approaches through a series of fifteen case studies, corresponding to contributions given at a colloquium held at the University of Lausanne in 2015. The volume wishes to assess specifically the functions of transepts through thematic domains highlighted in the subtitle: architecture, decoration, liturgy, and sound. As is often the case with collective monographs, the publication at times lacks unity for what it gains in fruitfulness. Despite the international provenance of the authors and the stretching of the case studies from Spain to England, France, Switzerland, Germany, and Northern Italy, all of the essays except two are in French. The body of texts is framed by a rich introduction by the editors Barbara Franzé and Nathalie Le Luel, containing up-to-date bibliography and uniting the different contributions, as well as closing remarks of Jean-Pierre Caillet.

The introduction as well as the first essay of the volume (by Nicolas Reveyron), dwelling in parts on older studies by Pierre Héliot and on Michel Lheure's synthetic monograph of 2007 [1], remind of the importance of this space. Besides the deep focus which has been given in recent years to liminal zones or since long to the other two main axes of sacral buildings - formed respectively by the westwork and the chevet - this volume focuses on the transept. As the second structuring axis besides the main nave - forming the second arm of the highly symbolic 'crux' mentioned already by Ambrose of Milan in the fourth century - this transversal space indeed offers opportunities for further valorizing the liturgical focus formed by the space of the altar. But this enriching of the building can also be projected towards the cityscape, as in Saint-Sernin in Toulouse, where two portals erected in the eleventh century are placed on both extremities of the transept and richly adorned with an imagery indicating the entry to lay and clerics.

Not being a mandatory component of the church, the transept is a multifunctional and highly adaptable space, depending on local and sometimes topographical situations. As such, it allows solutions for the circulation of pilgrims, access to relics and crypts, the separation of various involved communities, spaces testifying of acoustic dimensions, as well as the marking of specific liturgical feasts or events: Easter, baptismal or funerary rites. On a more art historical note, the structuration of the transept is also often used to visually highlight the sacral space, by interrupting the rhythm of the nave, allowing for a diversity in modalities of decoration (pavement, polychrome variations, shifts in architectural features) which in turn reveal liturgical or functional dispositions. The whole question is also framed in what is noticed as a progressively higher fractioning of the sacral space throughout the Middle Ages, a phenomenon probably answering to the cohabitation of different communities within a same space and the development of pilgrimage - two complex and much discussed historiographical questions.

Formal criteria are thus always intersecting with solutions of spatialization, crucial to the understanding of the social and religious dynamics underlying the creation and extension of ecclesiastical space. The cultic functions of these spaces remain the key question which forms the focus of the majority of the essays contained in the discussed volume. It must be noted that in many cases, however, these questions still seem to be overshadowed by formal questions relying solely on discussions of architectural concepts, patterns, and motifs. More interesting are questions regarding the circulation within sacral space, often difficult to reconstruct without an archaeological and historical gaze on multi-layered and deeply altered structures. The essays by Pierre Martin on a group of churches from the Valley of the Loire or Thomas Spencer on Saint-Rémi in Reims are in this sense exemplary of how careful reconstructions can nuance older typological patterns, opening the way to new discussions on the functions of spaces. Specifically, on upper spaces, the remarks of Toby Huitson on the multiplicity of possible functions - from storage to upper altars - highlight the importance of taking into account the transformations of ecclesiastical space.

The acoustic dimensions of these spaces, allowing the placement of choirs or instruments which can be hidden from sight but are likewise producing an important part of the polysensorial experience in the Middle Ages, is also a research focus which could prove fertile, and which fails to find a strong focus in the present volume, despite two contributions focused on this topic. The essay of Olivier Manaud and Cécile Barrando about the 'philosophical' dialogue between sound and hospitality in medieval church spaces fails to mention the eventual role played by the transept. On the other hand, Kristin Hoefener, who coherently highlights the acoustic dimensions of liturgy through the study of two liturgical manuscripts from female monastic communities in Essen and Quedlinburg in the Ottonian period, asks interesting questions on the spatialization of liturgy but fails to not connect more deeply to the imposed topic of the function of the space within these mechanisms, an interplay which is often difficult to reconstruct.

All in all, the present volume offers food for thought on important and sometimes crucial issues. One question remains widely open, however: the modalities of access to sacred space and of hospitality within pilgrimage contexts. Many of the cases, in which the historiographical discussions are still far from being settled, might require a refreshed and sometimes pondered look on this topic. What are, for instance, the modalities of visual access to the altar space from the "elevated spaces" of transepts? Can we at any rate suppose that elevated spaces of the transept were at times also used (and maybe conceived) as spaces of welcoming pilgrims, for example when the nave was not accessible because of a liturgy? What is the role of furnishings such as curtains blocking or allowing the view to the space from the elevated areas? At Conques for example, - a structure heavily altered by time and still presenting a deep historiographical conundrum - could the access to the church be possible from the northern arm of the transept, so close to the hillside? Regarding the questions left open, one can only agree with Caillet's conclusion that the issues addressed by the various specialists surely will form a step towards new and fertile studies. Further, questions regarding the perception of cultic spaces, as such integrating recent art historical questions, could have been a stronger component of the present monograph.

Lastly, one can maybe regret the strict focus on the 'West', and the absence of a contrapposto with situations outside of the European frame and in the 'East', which could have been fruitful specifically in the cases of pilgrimage churches or in the mirroring - or 'copy' - of particularly influential architectural patterns.