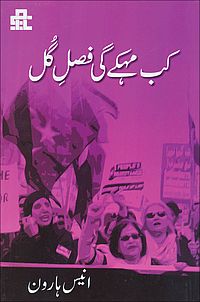 It is widely believed that the women's movement in Pakistan was initiated by women of the upper and middle class. This notion is somehow also applicable to the history of most of the women's movements around the world. In developing societies like Pakistan where the ratio of educated girls to their male counterparts is drastically lower, one can find educated women mainly among the affluent and middle class. However, the participation of these elite women in their struggle for the rights for their sex in most cases acted as a facilitator rather than an obstacle. The tale of Anis Haroon is an example that disproves this stereotype. Throughout her life she consistently remained a political and human rights activist. Haroon's autobiography, Kub mehkay gi fasl-i gul, records the struggle of a person who was undoubtedly a powerhouse of the feminist movement in Pakistan.

Haroon summarizes her life story in thirty-five chapters as thirty-five adventures. Haroon grew-up with a middleclass background and she was a kind and simple woman. She records how fortunate she was for having close friends including the progressive feminist Urdu writer, Fehmida Riaz, and the television director, producer and owner of a private television channel, Sultana Siddiqui. Fehmida Riaz contributes a chapter-length tribute to her dearest friend, Haroon, and mentions their participation in debating societies and student politics in their college in Hyderabad, Pakistan.

In her first two chapters, Haroon records her formative years, hearing the tales of the 1947 partition of British India and the ensuing migration from her mother. She believes her mother died early because she left her hometown and moved away from her roots in Hyderabad Deccan, India to Hyderabad, Pakistan. Haroon's father was not allowed to study medicine by his father, and since he had no interest in farming, he joined the British army. The migration brought financial difficulties to the family, which brought additional burdens onto Haroon's mother who not only lost her house but also a luxurious life. She had in fact never cooked before in her life.

For her whole life, her mother was trapped with her memories of back home in Hyderabad, Deccan. Haroon, for her part, recalls the best five years of her life which she spent in Hyderabad, Pakistan. There she made friends who stayed with her for the rest of her life. Her college years in Hyderabad laid the foundation of her political career, although, Haroon writes, she became an activist at quite a young age. She was a great admirer of revolutionaries such as Gamal Abdel Nasser, Jamila Buhayrid and Laila Khalid. She collected their pictures and newspaper clips.

The memoir is also a nostalgic reminder of when the youth were actively involved in student politics in Pakistan during the 1960s. The National Student Foundation (NSF) was vocal against injustices and corruption in the educational system. Female students participated in protests alongside their male counterparts. Haroon's time at the University of Karachi was a turning point for her political career. The prominent political and literary figures of the country like Javaid Jabbar, Dost Muhammad Faizi, Zahoor Bhupali were her contemporaries.

While this might be due to the limitations of space, there is a gap in her treatment of her role as a woman student activist. The reader interested in gender history will be left curious about the gendered dynamics in the student politics and the experiences of Haroon as a woman in these protests and political activities. For those interested in these questions Haroon is a significant source. Her reminder of the NSF's unwillingness to select her as a nominee for the president of their organization indicates that the environment at that time was progressive but not liberal enough towards women to accept them into leadership positions. These questions have still to be explored.

Haroon started her professional career both in teaching at a school and writing in newspapers because her father's business was in decline and she was paying her siblings' educational expenses. Working at school gave her enough time to start appearing in shows at Radio Pakistan. Working on the radio increased her network, and she received an offer to do a weekly show at the Voice of America's Karachi office. But she had to quit the job because of the unwanted advances of her program producer. Haroon highlights how a strong woman like her never spoke out against this because Pakistani society never encouraged the victims of harassment. She emphasized the promotion of awareness about sexual harassment in the school curriculum.

The loss of East Pakistan was a critical turning point in the history of political movements and also for the Peoples' Party of Pakistan. In her chapter "From Peoples' Party to Bangladesh," Haroon states that the internal structure of the Party was significantly changed after the success in the 1970 election. Haroon, herself a leftist, saw the power of the left being undermined within the party as the landowning class gained strength.

The late 1970s and the 1980s marked a shift in the women's movement in Pakistan due to the introduction of legal reforms that marginalized women. Haroon shows displeasure toward the infamous Hudood Ordinances, which in many cases charged rape victims with adultery or zina. President Zia ul Haq's government used religious symbolism to consolidate power, and women and minorities were his convenient targets. Present Pakistani society is still reaping the fruits of his politics of misogyny and hatred, and it is evident in increasing intolerance and radicalism.

Revolutionary women like Anis Haroon felt these injustices in 1981 when a couple, married against the wishes of girl's family, was captured and charged with zina. They were sentenced to a hundred lashes and imprisonment. Women from various organizations such as All Pakistan Women's Association, Pakistan Women's Lawyers' Association, Jamhooriyat Pasand Khawateen (Democratic Women's Association), Shirkat Gah and others finally decided to launch a platform to protest against these discriminatory laws and formed Women's Action Forum (WAF). Haroon, who was one of the founding members, records the activities and expansion of the WAF in her account.

The activist's life is not a bed of roses, and her passion for caring for the vulnerable touched Haroon's heart. She recalls all those women who came to her for support and also offers readers a glimpse of the injustices that these women faced in the past three decades. She writes one chapter about the unnamed graveyards of women who were killed in the name of honor in Sindh. On International Women's Day, March 8, 2014, WAF paid tribute to the victims of honor killings by visiting a graveyard and showering flowers.

Anis Haroon's account of her married life shows how love and respect between a couple are a perfect blend for successful personalities. Dr. Haroon, Anis's husband, was a political activist himself and always stood by her side in her decisions and engagements with the human rights movements, whether these were involvements with the Peoples Party, WAF, protesting for judiciary, or facing imprisonment for challenging the system.

Kub mehkay gi fasl-i gul is a microhistory which reveals the activities of the political left during the 1960s, the student politics, the history of women's journalism, and the women's movement in Pakistan. The monograph is a valuable source for students of history, political science and also gender studies. The book is also critical, especially for young Pakistanis, for looking into the glorious past where young minds formed their political opinions through observation of international politics and personal experiences. It was a time when expressing diverse opinion was not a crime and Pakistani society was far more tolerant.