King Abdullah II of Jordan: Our Last Best Chance. The Pursuit of Peace in a Time of Peril, London: Viking 2011 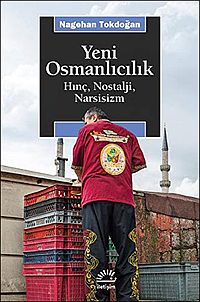 Recent academic and public discussions in Turkey about the 16 years of Justice and Development Party (AKP) rule in Turkey have scrutinized AKP partisans and their unbroken support for their party and especially its leader, Recep Tayyip Erdogan, despite the deepening economic and identity crisis of the last decade. Whereas most of these accounts focus on the successes in the AKP's redistribution of financial and cultural capital, and its charitable activities, there is still a lot of work to be done in understanding how 16 years of its consolidated rule came about. One such study that aims at filling this gap is Tokdoğan's work, which analyzes the Neo-Ottomanist discourses of the AKP through a psycho-political perspective in order to understand the emotional and psychological backbone of the last decade of AKP government.

The book is based on a thorough reading of scholarship on the political sociology of emotions (Chapter I). Among others, Tokdoğan's work is inspired by Sarah Ahmed's notion of "collective feeling". This refers to the sum of feelings over shared objects which surrounds the community and forms it. Tokdoğan also follows Raymond Williams' concept of a "structure of feeling" as the concrete phenomenon that comes out of a process of experiencing the collective state of mind ("halet-i ruhiye"). Based on these two main conceptualizations, Tokdoğan follows the evolution of what she calls "a climate of feeling" (pathos) (33) surrounding the constituents of AKP. She argues that this climate was shaped, regulated, and modified by the AKP throughout its rule through Neo-Ottomanist discourses and symbolism. The main thesis of her study is that the Neo-Ottomanist narratives came about in order to satisfy the need of Islamist conservatives and a larger right-wing constituencyto see themselves as "potent subjects" against a history of victimhood under the Republican rule since 1923. According to the author, the AKP's (read Recep Tayyip Erdoğan's) success lies in its ability to transform the narrative of a long history of victimhood into a narrative that conveys feelings of victory, generating a new identity or ethos characterized by narcissism and self-worship (81).

As Tokdoğan explains (in Chapter 2), Ottomanism was a response of the Ottoman intellectuals and bureaucrats of the second half of the nineteenth century to the identity and citizenship crisis that threatened the political system and the integrity of the empire. Ottomanism aimed at creating a new form of imperial citizenship, whose cement was not ethno-religious identities, but the ideals of freedom, equality and a common motherland. All in all, it was an imperial project that aimed to save the empire from the threat of nationalism and the nation-state. As the Ottomanism project failed due to the success of nationalisms, Sultan Abdulhamid II (r. 1876-1909) attempted to keep the empire together by mobilizing Islam as the constitutive element of imperial identity. Under the Turkish nation-state, both reference points (an imperial identity and Islam) lost ground to a secular national identity and to political and cultural space. The history of continuous de-Islamization and de-imperialization/de-Ottomanization of the cultural and political space in 20th century Turkey constituted the backbone of the Neo-Ottomanist pathos and vision of creating a Muslim-Turkish ethos. During the 1950-2000 period, a Neo-Ottomanist "ghost" loomed over the country, becoming occasionally visible, especially when a conservative party took up the government. The ghost had to wait until the AKP consolidated its rule in the late 2000s, in order to become flesh and bones again.

After a brief introduction to the history of Neo-Ottomanism, Tokdoğan argues that Neo-Ottomanist narratives of the AKP period are complex, multifocal and multireferenced; however, the collective feelings around them are uniform (100). More importantly, these collective feelings were evoked by Recep Tayyip Erdoğan from the very beginning of his political career until the end of 2000s, successfully through a pathos characterized by a narrative of victimization. According to Tokdoğan, the constitutive historical trauma of Erdoğan's pathos were the Westernization/modernization of the Ottoman empire starting from the Tanzimat edict of 1839, and the enforcement of further secularizing and Westernizing policies by the Kemalist elites of the Turkish Republic throughout the 20th century (95-129). For Tokdoğan, Erdoğan's conveying of past traumas created the feeling of an imaginary bond between the generations who have not experienced those traumas and those who have. She argues that humiliation/impotency of the "enlightened" West/Modernity, envy towards the (imperial) power wielded by the West, disgust towards the potentially degenerative values of the West, hatred towards the Kemalist elite, and anxiety towards/fear of the contemporary Kemalist/Republican Party (CHP) mentality, have formed a heterogeneous and sometimes inconsistent "archive of feelings" (a concept she borrows from Ann Cvetkovich). Explaining each feeling in its complex social-psychological context, Tokdoğan argues that this archive of feelings/victimhood have successfully been used as a tool by the AKP to mobilize a large group of constituents.

The transformation of the Neo-Ottomanist narrative and pathos after 2009 is explained in detail as a crucial breaking point. Tokdoğan suggests that the 2009 Davos meeting, in which Erdoğan accused Shimon Peres and the Israeli state of consciously killing Palestinian children, and the Davos organizers silenced him (he left saying he would not come to Davos again), has become a moment of compensation for the 200 years of silence, oppression and humiliation of the victim(ized) subject (133). That moment and the subsequent rise of feelings of revenge and envy transformed the constitutive element of Neo-Ottomanist pathos based on feelings around victimhood, into a passion for ontological resentment. More importantly, through a non-diplomatic language and with masculine gestures that had their roots in the suburbs of Istanbul, this resentment-generating performance transformed Erdoğan into a symbol. From 2009 on, Erdoğan satisfied a need for a long-awaited strong leader that had been felt since Sultan Abdulhamid II, identified as the savior of Islam and the Empire.

The post-2009 climate of feelings allowed the cleavages and antagonisms between West/East, Islam/Christianity, Islamists/Secularists, the elites/the people, outsider/nation-state citizen and native, to deepen in the symbolic and physical space of politics. As Tokdoğan explains, the reflection of that widening chasm could be seen everywhere from film and series productions (91), to eclectic architectural "styles" borrowed from the Seljukid and Ottoman periods or gigantomaniac building projects allegedly showing imperial grandeur (Chapter 4), and to the development/re-construction/re-conquest of Istanbul symbolically and literally (through a craze of construction) as the capital of the Empire - as opposed to Ankara as the capital of the secular Republic.

Finally, (in Chapter 5) Tokdoğan points to the fact that the 15 July 2016 coup d'état, allegedly organized by former Islamist allies of the AKP, created another breaking point for the "climate of feeling" in Turkey. Tokdoğan reconstructs the meaning of the symbols and rituals during and after the coup as an attempt by the AKP to enlarge its area of hegemony. She argues that the glorification of the popular reaction against the military intervention - especially in Istanbul (standing in front of tanks, blocking the roads so that soldiers could not pass, or simply becoming targets for bullets) - and the identification of this resistance with the Turkish war of independence against the Western invaders after WWI, aimed at sharing the ontological resentment with, and spreading it to, the rest of the society. However, the weakening of the long-lasting polarization (between what represented the Neo-Ottomanist identity and the secular Republican identity) in the political space through the welcoming discourse of the AKP right after the coup, was not sustainable, as peace with the internal enemy (namely the Republican People's Party - CHP) meant giving up the symbols and narratives that made up the Turkish identity/ethos which Erdoğan and his party had tried to build. As Tokdoğan explains, the binary opposition between West/East, Islamist/Secularist etc. would soon kick in again. Today, the Neo-Ottomanist pathos still defines AKP narratives and discourses; however, the AKP seems to have lost its hegemony over the climate of feelings as, according to Tokdoğan, the CHP has successfully borrowed symbols and rituals capable of evoking feelings from the "archive" in order to give a new direction to Turkish identity (271-272).

Despite its merits in explaining the transformation of the climate of feeling as an important drive behind the consolidation of constituents of the AKP especially from 2009 on, this study could have contextualized the identity crisis that required the transformation of the national state of mind ("halet-i ruhiye") of a large part of the Turkish society within a larger/international scale. By focusing too much on the peculiarities of Neo-Ottomanism as one form of right-wing populism, the book misses the opportunity to establish connections with other populisms that also harness imperial nostalgia. Admittedly, it would not be correct to assume a direct correlation between what generated imperial nostalgia in Europe/West and what constituted Neo-Ottomanism in Turkey. However, despite its longer and silent history, Neo-Ottomanism found its ultimate shape and voice in an environment where identities, forms of citizenship, and patterns of inclusion and exclusion have been challenged by neoliberal globalization, the "refugee crisis," and economic crises elsewhere too. From Russia to Eastern Europe, from Austria to Britain and to the US, a climate of feeling based on imperial nostalgia to "make us great again," still looms and determines the fate of political space. [1]

The issue of scale creates two more important issues throughout the book. Tokdoğan claims to focus on the constituents of the AKP, giving them agency and constructing them as political subjects that change position and respond to the political developments in relation to the changes in the climate of feelings. To do so, she explains that the Neo-Ottomanist pathos succeeded in touching the "narcissistic wound" (108) of the AKP constituents. To convince readers that the constituents actually "bought" the pathos and narratives, Tokdoğan occasionally provides screenshots of memes that support her arguments, posted by Instagram accounts that openly support and propagandize for AKP. Apart from those images and a few examples of demonstration of the feelings that she brilliantly analyzes (154, 181, and others), she fails to present any statistical data, surveys, or field reports that support her main argument that a "climate of feelings" around a Neo-Ottomanist pathos helped the AKP to consolidate its rule. Secondly, by defining the constituents of AKP conservatively as Islamists and right-wingers, she fails to understand the role of anti-Kemalist liberals, who supported the AKP until late 2000s. The contribution of anti-Kemalist liberals, and to some extent leftist intellectuals who had partially shared the hatred and anxiety against the Kemalist past, in rewriting a critical history of Kemalism cannot and should not be ignored. The support given by liberals and leftists to the AKP in elections until the late 2000s - and particularly to the 2010 constitutional referendum - is well known and still a subject of debate within liberal and leftist circles. The relationship between them and the Neo-Ottomanist pathos should, at least briefly, have been mentioned in the book.

Even if Tokdoğan's study fails to give agency to the constituents of AKP and scrutinize their state of mind ("halet-i ruhiye"); by successfully putting feelings at the center of its analysis it offers a new and promising tool for a large audience from academics to students of political science, sociology and history, and to the general public, for understanding the last ten years of the political developments in Turkey with a different view.