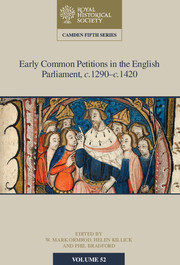 This fine work is an edition and translation into English of a series of "common" Parliamentary petitions across the late middle ages in England. "Common" petitions were those petitions that were presented to the king and his council on behalf of the community of the realm rather than from a specific individual. The aim of these "common" petitions was to see to the interests of the broad political community rather than to simply see to a redress of a grievance from and individual person or their family. As such, these "common" petitions tell the historian a great deal about how kings and councils chose to define and support the collective interest of the realm.

The petitions included in the volume were selected by the editors on the criteria of 1) that the petition was explicitly made in the name of "the community", and 2) those that have been already published elsewhere. The collection, therefore, is not a complete compilation of all common petitions. Common petitions are generally only one paragraph in length and are always focused on the "common profit" or on matters that needed redress for the common well-being of the Crown and the political community, not merely one of the two or a particular individual.

The petitions are presented thematically and in chronological order within each section. Thus, the work is divided by: Ministers and Elections; Church and Religion; Liberties, Franchises, and Rights; Crime, Debt and the Law; Merchants, Trade, and Finance; War, Resistance, and Revolt; and Multiple Petitions where a number of petitions were brought forward under one umbrella petition.

The documents themselves are presented clearly and effectively. Each document is labeled with its appropriate TNA (The National Archive) classification number, a summary in English of the document, a transcription of the text itself in Anglo-Norman French, followed by an extensive series of notes that place the document in historical context. The book concludes with a chronological appendix of all the known common petitions and an extensive bibliography to help place the petitions more firmly within their historiographic context.

English medievalists will be very pleased with this little book. It opens up a host of documents in context that had largely hitherto been buried in the National Archives. The editors have done an excellent job of placing each document within its appropriate context and this collection gives historians and students of the late middle ages in England more primary sources to draw from to interpret the past within its appropriate context.