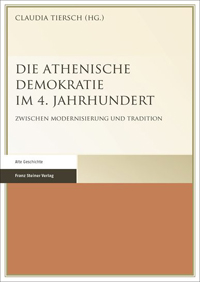 Tiersch sets the agenda of the volume as an investigation into the developments which took place in Athenian democracy between the fifth and the fourth centuries BCE, as well as throughout the fourth century. She introduces the concept of 'modernisation' (with its focus on bureaucratization, rationalization, socio-economic differentiation) as the key analytical tool. Yet the volume uses the concept only sparsely. Nevertheless, many of the chapters are indeed very valuable contributions, and the volume is a must-read for historians of Classical Athens. I cannot discuss in the short space of this review all the chapters, so I shall concentrate on some notable ones.

Rubinstein (55-72) provides an insightful discussion of Athenian attitudes to revenge displayed in the courts, in their connection with the experience of stasis. She thoughtfully concludes that such calls for revenge are normally found (without much change from the early to the late fourth century) in public cases concerning religious offences, treason and 'katapolitical' bribery, and are matched by heightened emotional appeals in these contexts. The investigation however excludes the key evidence of fifth-century homicide speeches, and the association of 'revenge' with τιμωρία terms is taken for granted - the study would have benefited from a more thorough semantic analysis, also connecting τιμωρία with matters of personal and communal τιμή (cf. D. L. Cairns, 'Revenge, Punishment, and Justice in Athenian Homicide Law', Journal of Value Inquiry 49/4 (2015) 645-65).

In his chapter (73-88), Harris convincingly shows that the differences between the fifth and the fourth century that have been postulated by many scholars, in terms of the underlying values of the political system and of how they were implemented institutionally, have been overplayed. Far from transferring sovereignty from the people to the law, the new legislative procedures reinforced the role of the demos; the powers of the Areopagus from 350 to 323 were not expanded but in line with traditional prerogatives; there is no evidence of an enhanced role of the courts. Finally, Harris shows that the Athenians subscribed to an ideology of the rule of law already in the fifth century.

Thomas's chapter (89-107) discusses whether the changes introduced in Athenian law and institutions at the end of the fifth century (which she reads as aimed at tempering the excesses of fifth-century democracy) had an effect on the practices of the Assembly and the lawcourts, and whether the performative, social and political reality changed at all. Thomas correctly concludes that there was not much change in the level of shouting and jeering going on in the Assembly (yet she seems to assume that there are no institutional differences between Assembly and lawcourts, and uses sources from both indiscriminately). At times, she reads such phenomena as nothing more than emotional disturbances - noise and shouting can only be bad and inimical to deliberation - underplaying their importance in the process of consensus creation in discriminating between divisive and 'integrative' or unifying speeches and proposals. Elsewhere, however (e.g. 100-1), she usefully highlights that they are evidence of the dynamic interaction between speaker and audience.

Rhodes (109-21) reviews the evidence for changes in the appointment practices and roles of officials between the fifth and the fourth century, and throughout the fourth, but shies away from providing a wider picture of development. He convincingly notes that the Athenians, faced with reduced citizen numbers, chose to widen the recruitment basis rather than permitting iteration, and combined improved expertise with improved reliance on selection by lot. Some of the explanations for particular changes are less satisfactory: e.g. the creation of the proedroi is explained as a move towards making it impossible to know who would preside on a given occasion - more should be made of the realisation that the tasks of setting the agenda and of running and facilitating the meetings should be separated.

In a very wide-ranging chapter (121-62) Gabrielsen provides an account of the institutional development of social networks and associations in Athens: from their inclusion in the city-institutions towards creating a new public space with the Cleisthenic reforms, to the emergence of private associations in the fourth century, first aligned in their language and membership with city institutions, then, from ca. 300, increasingly open to non-citizens (all the way to ethno-congregational religious associations in which Athenians were a minority). The reconstruction is suggestive, but one must note that the earliest clear Athenian evidence for more open associations featuring non-citizens is quite late (SEG 25.155, of 236/5 BCE). Grieb (359-84), in an equally wide-ranging chapter, offers an implicit challenge to this view (as well as to Daverio Rocchi's thesis, at 163-83, of the increasing centrality of the dimension of the deme, and of private munificence) pointing out that the result of repeated attacks on wide citizen franchise in the early-Hellenistic period produced a consolidation of the attachment to the notion of demos.

Pébarthe (223-32) reviews the evidence for economic policy in Athens in the fifth and fourth centuries. First, he argues with a few compelling examples that the economic prosperity of Athens in the fifth century was not simply a by-product of policies aiming at political domination, but rather the empire was administered with the economic dimension firmly in mind. Second, he surveys the measures enacted by the Athenians in the first quarter of the fourth century to secure the centrality of the Piraeus despite the loss of the empire, and highlights the focus on securing the rule of law, and on appropriate monetary and trade legislation that could renew trust and cement the centrality of Athens. The picture he provides is strengthened by the accounts provided by Cohen (207-222) of the measures implemented by the Athenians to maintain the centrality of the Piraeus; and by Eich (33-52) of policy on prices and production.

Shipton (253-60) finds a correlation between changes in the liturgical system at various points of the fourth century and changes in the profile of the lessees of the Laurion mines. The large burden on the very rich (in terms of trierarchy and proeisphora) from the 370s onwards matches the overrepresentation of the trierarchic class as investors in the mines (due to the need for available funds and liquidity). The creation of the trierarchic symmories (and possibly of a law exempting holdings in the mines from taxation) widened the pool of lessees, because more people found themselves in need of ready funds. The thesis is very attractive and makes good sense in itself - one only wonders whether the (rather small) differences found in two records (one from 367/6 and one covering 342-39), based on a very limited sample of lessees, are enough to postulate that a change actually occurred. Taylor's chapter (261-77) looks at the other end of the social scale and makes the case for a qualitative approach to poverty, seen as a comparative notion construed culturally and socially.

In one of the most illuminating chapters of the volume, Liddel (335-57) offers the most comprehensive and nuanced investigation to date of the practice of awarding honorific decrees in fourth-century Athens. Liddel analyses side-by-side the epigraphical and the literary evidence about honours, pointing out both continuities and differences. Among his many findings, it is striking that the growing reliance on honours to reward and secure the services of top politicians and foreign potentates and traders is matched by a growing attention to honouring the achievements of ordinary Athenians and boards of officials selected by lot. Despite the recognition of the importance of honours to foster public spiritedness, economic benefits and international relations, the Athenians strive to keep the honour system fundamentally aligned with democracy. At the same time, this alignment is not a given, but is continuously negotiated, as Liddel's focus on anxieties and debates on honour shows.

In the concluding chapter (385-93), Davies sets the volume within the wider historiographical debate about fourth-century Athenian democracy, in particular with reference to its most direct ancestor, the 1995 volume of the same title edited by Walter Eder (Davies is the only contributor that has taken part in both enterprises). After some sensible criticism of the terminology of 'modernisation' used in the title, in the introduction and (sparsely) throughout the volume (e.g. in Nebelin's and Timmer's chapters), Davies paints a picture of Athenian development in the fourth-century that combines technological advancement, financial behaviour and political and social tensions (the citizen/non-citizen divide; freedom in private life; and political and institutional 'improvement' as opposed to indecision and tensions in external relations).

This is a very thought-provoking volume that will become a point of reference for all students of fourth-century Athenian democracy.