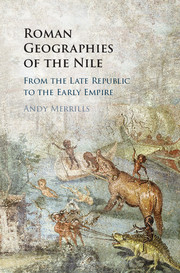 Andy Merrills' Roman Geographies of the Nile proposes an analysis of Roman views of the Nile in late Republican to early imperial Italy. As such, it contributes to broader conversations on Roman geography, the socio-politics of spatial representations, and the cultural reception of imperialism in Italy.

The book comprises six chapters. Ch. 1 discusses the now lost grand public mapping projects (chorographies) of the Late Republic/early Principate, as well as Vitruvius' de architectura book 8 and the Praeneste Nile mosaic. Focusing on the social contexts in which these different 'maps' were experienced, Merrills suggests that they were not authoritative products but spatial displays meant for admiration and discussion. Ch. 2 deals with the reception of State-produced geographical knowledge in the contexts of military triumphs and other imperial displays. Ch. 3 moves away from Rome and discusses the significance of the Nilotic wall paintings and other Aegyptiaca found in the houses and gardens of the Italian elite of the time. According to Merrills, such paintings - which depict Egypt using a series of stereotypical tropes - are political artifacts that testify to a shared, interiorized understanding of Egypt and its relationship to Rome. The second part of the book deals mostly with literary views of the Nile. Ch. 4 focuses on philosophical understandings of the Nile; first in the works of Lucretius and Seneca the Younger; second as documented by the Iseum of Pompeii. Ch. 5 explores the "linear nature of the Nile" as conveyed in itineraries and peripli, the expedition sent upriver by Nero, Strabo's geography of Egypt, and later texts that are said to provide "plausible sounding but nonsensical geographies" (Tacitus, Juvenal, ancient Greek novels; 25). Ch. 6 focuses on the representations of the river in epic and elegiac poetry, with a particular emphasis on Lucan. In lieu of a conclusion, the afterword discusses Pliny the Elder's treatment of the Nile in his Natural History.

Roman Geographies of the Nile is both inspired by and critical of Claude Nicolet's 1988 L'inventaire du monde. According to Merrills, Nicolet overemphasizes Augustus' actual power over the intellectual modes of representations of the Empire, and fetishizes the historical significance of a very limited corpus (Res Gestae, the Breviarum, and Agrippa's 'map'). The result, he argues, is an oversimplified conception of "the complexity of Roman responses to the world" that elides the existence of "discordant or subversive geographies" (14). By analyzing a wide-ranging array of Roman representations of the Nile, Roman Geographies of the Nile convincingly argues for a more kaleidoscopic and decentralized understanding of how Egypt was seen through Roman gazes.

Roman Geographies of the Nile owes a lot to the work of Edward Said - Orientalism, but also Culture and Imperialism. Yet the extent of this debt is not explicitly acknowledged (though both works appear in footnotes) nor capitalized upon. Similarly surprising is the lack of engagement with theories of power. The repercussions of these overlooks are profound.

Just as Orientalism is in many ways not about the Orient, so does Merrills remind the reader that his "is not a book about Roman Egypt". Rather, it "wishes to examine and interrogate how "the Romans' saw the changing imperial world around them" using a case study "which happens to be located in Egypt" (20). The Nile, therefore, is an argumentative prop, whose legitimacy stems from the fact that it was of particular interest to the Romans themselves and is, thus, documented by a substantial corpus (16). While this analytical stance is a legitimate one, it appears to be the rationale for a minimal engagement with the socio-economic and cultural realities of Roman Egypt.

Said's work - like his historiographical legacy - has shown how discourses on the 'Other' are not so much aggregates of floating topoi as discursive devices that are historically-rooted: In individual biographies, as well as, more broadly, in the many, overlapping power relationships between agents of empires on the one hand, and imperial landscapes and subjects on the other. Yet Roman Geographies of the Nile either ignores or only briefly alludes to (in short passages or notes) several relevant events and phenomena attested during the period under study: The presence of an Egyptian diaspora in Italy; the many movements of people between Egypt and the Italian peninsula; Cleopatra, Ptolemy XIV and Caesarion's stay in Rome; Egypt's contribution to the grain supply of Rome and its sociological impacts on the reception of the Nile in Italy; broader, Nile- [1] and sea-borne commercial relationships between Egypt and Italy; Egypt's role in the 'Indian Ocean' trade; imperial visits to Egypt and representative strategies pertaining to the Nile beyond Nero's upriver expedition; the fact that until the Flavians, members of the imperial house, friends and freedmen of the Emperor (including Seneca the Younger) owned agricultural domains (ousiai) in Egypt; [2] the reception of Egyptian/Alexandrian science, religious knowledge, and culture among Greek and Roman intellectuals, elites, and worshippers of Egyptian deities; [3] the role of Alexandria as a Mediterranean center of knowledge production, storage, and dissemination. Did these phenomena impact the ways in which Roman artists, writers, politicians, elites, and commoners viewed the Nile? They undoubtedly did. How? By choosing not to engage with these fundamental questions and the data and scholarship that pertain to them, Roman Geographies of the Nile proposes a disembodied view of the realities it proposes to unpack.

For instance, one has to wait to ch. 4 (176) to find the first mention of intersecting dynamics between lived experiences and representations of Egypt/the Nile. There, the many years Seneca the Younger spent in Egypt while a young adult [4] and his interest for/work on Egyptian rituals are alluded to, only to be quickly dismissed as a valid analytical element:

"That Seneca, in particular, was aware of Egyptian philosophy is not to be doubted; as a young man, he had travelled to Alexandria for his health, and while there composed a treatise On the Locations and Rites of the Egyptians (De situ et sacris Aegyptiorum), which has since been lost. To judge from the one known fragment, this work included sensitive analysis of Egyptian rituals, which he may also have drawn upon in the Natural Questions, yet Seneca seems to have had little interest in the intellectual activity of the region." (175)

The last clause of this passage is not substantiated by any reference, and Merrills does not specify what he means by "the intellectual activity of the region". Strabo's time in Egypt - and Roman travels in the province - are discussed at more length in ch. 5 (215-220), but as brief case studies rather than as evidence for lived Roman experiences of the Nile upon which views of the river were (re)shaped. One would have wished this section to be expanded and featured way earlier in the book. Likewise, the topos of the seven mouths of the Nile Delta is discussed quickly, without mention of Ptolemy - whose work is key. Nor does Merrills mention the scholarship on the evolution of the deltaic fluvial landscape between the Late and Arabic period, which shows how literary texts do, in certain cases, have more historical value than traditionally assumed.

Roman Geographies of the Nile discusses a wealth of evidence on Roman views of the Nile. The author provides a well-documented analysis of the numerous types of representations - symbolic, cartographic, iconographical, architectural, textual - that have come to us, and convincingly argues in favor of a context-based approach to this material. Yet by treating Egypt as a passive reflection of Rome's imperial gaze rather than as a conquered-yet-active partaker in the politics of imperial representations, Merrills loses the opportunity to endow his work with the full historical potential it deserves.

[3] See notably P. Vasunia: The Gift of the Nile, Oxford 2001 (who is referred to but not properly engaged with) and I. Moyer: Egypt and the Limits of Hellenism, Oxford 2011.