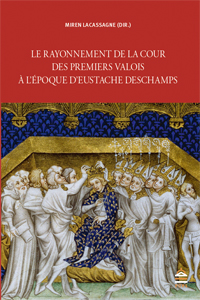 The French author Eustache Deschamps, who lived from1346 to 1406 or thereabouts, was a remarkable man. He studied with Guillaume de Machaut and became one of the most accomplished poets in the kingdom of France. He had close ties to the royal court, both as an administrator and as a courtier in the more cultural sense of the term. And his Art de dictier is the oldest surviving treatise, perhaps simply the oldest work that can genuinely be called a treatise, on French vernacular versification.

The collection of essays under review here is divided into three parts. The essays in Part II, with one exception, are more narrowly focused on Deschamps and his work than are the others. These are fascinating, learned and highly technical studies of Deschamps influences on Chaucer and Gower (see the articles by R. F. Yeager and Clotilde Dauphant) and on his understanding of the differences between natural and artificial music (the essay by Thierry Grandemange). The essay that veers from Deschamps per se and his work in Part II is Elsa Marguin-Hamon's study of his contemporary, Jacques Legrand, an equally learned man, who wrote on language and communication in his Sophilogium. Given the subject of her essay, or rather its similarity to certain of the themes treated by the other authors represented in Part II, it is appropriate that it should be grouped with them.

Parts I and III of the book are more contextual and political, and as such they offer insights into elite life in later medieval France and at the Valois court in particular. What a frightening world it was. There was the Hundred Years War, with its rogue soldiers devastating Languedoc and with the borderlands of the kingdom constantly being roiled by violent disorder. There was the Great Schism, which undermined trust in the capacity of the institutional church to help right the political situation. And one should also recall the periodic demographic devastations of the plague cycle. Together these circumstances gave rise to enormous fears, fears that led people to think that the end of the world was near (33). Or that the end of a world was near, their world, even if God's creation perdured, a beautifully executed theme of Vladislava Lukasik's essay.

Yet, strange to say, this dark side of life did not so overshadow human beings that they merely despaired over what was happening to them or retreated into fatalism or idleness. They could imagine or wishfully think that the war and the Schism might end in a great and united crusade to the East (on which, see Jean Devaux's splendid opening essay). Moreover, it was an astoundingly creative time despite the heavy burden of fear (see the essays by Evelio Miñano Martínez on the exhortatory Roman de Jehan de Paris and by Thierry Lassabatère on political poetry). The Valois court flaunted its culture and, in a sense, tried to export it, projecting a view of itself, a contested view, to be sure, as the very center of courtliness (cf. Gisela Naegle's essay).

All the articles in this collection are excellent and revelatory, but none more so than my favorite, Ghislain Brunel's study of "les chartes ornées des Valois." What are these extraordinarily ornate charters performing? For Brunel they do many things, but they also speak, he hints, to the English enemy, as a contribution to - an in-your-face projection of - aesthetic power, art as the continuation of war. A beautiful observation, and a sobering one.