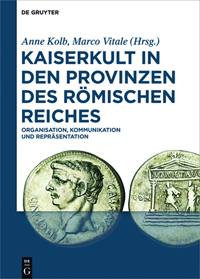 Edited volumes tend to be a mixed bag, and this, from a conference on the provincial imperial cult held in Zurich in 2014, is no exception. The title is somewhat deceptive, as almost all the 21 papers concentrate solely on eastern provinces. As such, Simon Price's Rituals and Power (Cambridge 1984) still provides a reliable theoretical basis for the more informed contributions, even after all these years. The editors (in "Provinzen und ihre Kaiserkulte - Quellen, Probleme und Ergebnisse," 1-18) introduce the volume, its sections devoted to origins, civic cults, provincial cults, priesthoods, and late examples, with much overlap among them. But each paper's usefulness is better signaled by what types of evidence the author uses, and how s/he uses them.

That most of the authors keep only to historical and epigraphic evidence, with few considering sacred buildings, statues, or even coins, is disappointing; tellingly, the sole index is of textual sources. It is difficult to say much that is new by depending on the literary evidence, which is long-known and well treated; some revisionist works here (e.g. Madsen's "Who Introduced the Imperial Cult in Asia and Bithynia? The Koinon's Role in the Early Worship of Augustus," 21-36, and Sørensen's "The Bithynians again! The koina and their supposed involvement in cases of repetundae," 337-352) must set up straw men to argue against. This brings up another problem of edited collections: how is one to get two contributors to deal with, or even recognize, each other's points of conflict? For Sørensen's paper debating the political role of koina (organizations of provincial cities) is immediately thrown into doubt by Vitale's "Provinciae als beschlussfassende Instanzen in Inschriften von Baetica bis Anatolien," 353-364, demonstrating that the terminology for such leagues (not just in the East but in western provinces) was not as specific as Sørensen claims.

Unfortunately the two papers based on archaeological evidence, those of Bru and Wienholz, show least understanding of what "imperial cult" means. In Bru's idiosyncratic collection ("Le culte impérial dans l'Orient romain: mythes, rites et structures," 57-78), the slightest sign of an emperor's statue or inscription in association with a god or temple is taken as evidence for worship, and its influence assumed to have spread far over time and space: for example, honorific inscriptions of Marcus Aurelius and Lucius Verus found near the Qasr al-Bint in Petra, plus statue fragments found nearby, are used to infer imperial cult not just in that complex, but in other buildings of different dates and functions hundreds of meters away. Wienholz, on the other hand, focuses on the "Temple of Bacchus" at Baalbek. His "Eine severische Neokorie im Bacchustempel von Baalbek," 229-252, attempts to prove by any means possible that this was not just a temple to the emperors but that it gained its city the title neokoros; there is no evidence for either of these claims, and Wienholz's special pleading reverses the proper course of scholarship, substituting fables for facts.

The papers in this volume that point out the diversity in personages, practices, and institutions of the imperial cult, at levels from individual to city to province, tend to be more soundly based than those that generalize (e.g., Herz on hymnodes and festivals in "Die Agonistik und der Kaiserkult," 123-132; Bekker-Nielsen on "koinarchs" in "Leading men," 367-386; and Raschle on the latest examples of emperor worship in "Bis wann bleibt der Kaiser 'Kult'? Die Verehrung des Kaiserbildes als Akt der Zivilreligion in der Spätantike," 477-496). Scholars who conflate all chief priests and "koinarchs" (two names for the same official in most koina, but likely not in Lycia), assign titles to cities that are not known to have held them, and do not recognize that institutions and nomenclature had different origins and developments over time and space, are in danger of writing just-so stories instead of history.