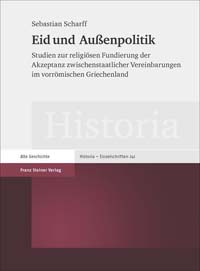 This welcome monograph is the revision and publication of Sebastian Scharff's 2012 Münster dissertation of the same title. Scharff's focus is on the religious aspects of ancient Greek international relations, and specifically attempts to safeguard international agreements through the medium of religion and piety. To that end, this book focuses largely on the oaths that were so key to ancient treaties: the texts of the oaths, the gods as guarantors of the oaths, the use of sanctuaries as repositories for treaty-texts, and the very interesting question of what happened to an oath once it crossed polis-boundaries, or even Greek/non-Greek boundaries. Studies of treaty oaths in ancient Greece are not new, but Scharff brings to the material some interesting points and questions.

The book is divided into seven sections, including the traditional introduction and conclusion. The meat of the argument, however, lies in sections 4-5, and I will focus most of my attention and allotted space on those.

In his introductory section, Scharff makes it clear that while understands and appreciates what he calls the "realistic" and "idealistic" approaches to oaths in the Greek world, he believes that it is possible to bring together both approaches to achieve a greater understanding of oaths between states (22). The idealistic approach represents the theory behind the oaths - e.g., the language they used, the safeguards put in place such as the involvement of the gods - while the realistic approach stresses the mutability of oaths and flexible, possibly even sophistic interpretations of them. Power politics are the background to these oaths, and they too must be taken into account (23).

The second section deals with oaths in the Homeric world. This is the least useful part of the book, not so much because of any arguments made in it, but because its relevance to the later Classical and Archaic periods Scharff goes on to discuss is not entirely clear. It is also the part of the monograph that feels most like a dissertation, in which a chapter is included simply to prove that the author has "covered" all his bases.

The focus of the third section is on divine retribution as a key religious element of the Greek oath. Like the second section, this has the feel of a dissertation chapter included to demonstrate grasp of bibliography, but Scharff uses it well to make his central point: the form of the oath ritual was very much due to the context in which the agreement was made. For instance, the sinking of an iron bar in the sea at the foundation of the Delian League indicated the solemnity and intended permanency of the agreement being undertaken between the Athenians and the Ionians (63). Here we see Scharff's desire to blend the "idealistic" and "realistic" interpretations mentioned above: the realistic is the context, the idealistic is the ritual.

The fourth section is by far the longest and most substantial in the book. Scharff takes us on a tour of Greek oaths between states, from the Amphictyonic oath through the oaths of the Second Athenian Maritime League in the archaic and classical periods, as well as oath-forms sworn in the Hellenistic period, whether they are formal oaths between states and Alexander's Successors, or oaths taken by entities like armies. To Scharff, oaths in the classical and archaic periods could be a form of dictation between states - the most notable example being, of course, the Delian League. This faded in the fourth century, but only to be replaced by a new problem: the Greeks' lack of a theory of international relations - they were far more interested in the question of the ideal polis - prevented them from establishing a lasting peace settlement in the fourth century (67). It was left to the religious underpinnings of Greek oaths and interstate relations to make any attempt at preserving harmony and the integrity of interstate agreements.

In the Hellenistic period, the political stratification and increasing focus on status of treaty signatories vis-à-vis each other created essentially two types of treaties: those involving kings, who did not swear oaths because that bore the implication of a vassal-oath (213), and those between individual cities, which gave rise to the practice of agreements about, e.g., sympoliteiae, in which the parties concerned were indeed equal. What Scharff is getting at is that there was a system ("idealistic") in place, although we would not recognize it as any systematic approach to international relations, but that that system also reacted to the sometimes harsh geopolitical realities of the new oikoumene.

The fifth section finally addresses Scharff's central question: how did oaths comprise a form of interstate communication between the Greek cities? Here Scharff looks not at the relative status of the parties to an oath, as he did in Section IV, but at the rhetoric of interstate relations, the speeches and diplomatic negotiations preserved for us in the historians and the orators. In this he builds on the work of Luigi Piccirilli (see his bibliography). The problem, as Scharff points out, is that oaths had both a religious and a legal aspect. Only individual parts of the oath tended to be used as an argument against the other party in diplomatic rhetoric, and these parts were usually religious in nature. Consequently, the overlap between the two areas was not resolved, arguments made on the basis of oaths tended not to be compelling, and so we are left with the impression that oaths received little respect in the area of ancient Greek international relations (261-262).

The last section before the concluding chapter considers oaths between Greek and non-Greek. Again, this feels like coverage, especially given that most of the non-Greeks under discussion have significant experience of Greek culture (e.g., the Persian satraps of Ionia and neighboring provinces, even Carthaginians) and we are therefore not dealing with two completely alien groups. Scharff's finding that such oaths shared a ritual structure with oaths between Greeks is not a surprising one (292-293), therefore.

The book is welcome because of its attempt to combine the two approaches of "idealistic" and "realistic" that we see preserved in Greek religion and diplomatic ritual as well as in the real-life results and effects of such oaths. Often scholars on Greek international relations take one or the other approach, but as Scharff elucidates well, both aspects were very much present, as were the aspects of religiosity and legality in oaths. It is the conflict between these that gives rise to confusion about the Greek attitude towards oaths on the international stage.

A few notes. The book is well-presented and I spotted very few typos. My one caveat is that the publisher boasts that the monograph includes all epigraphically and historically transmitted Greek treaties from archaic times to 168 BC. I am not sure this is an accurate claim; for instance, off the top of my head I miss Plutarch's quotation of Aristotle's report on the Spartan treaty with Tegea (GQ 292b) and the Spartan treaties with Persia preserved in Thucydides' eighth book (18, 37, 58).