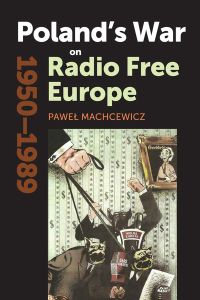 Radio Free Europe (RFE) began broadcasting to Poland in August 1950. From its first moments on the air, Poland's Communist government considered RFE a dangerous enemy. Paweł Machcewicz's book tells the story of the Polish government's campaign against the station. Polish leaders attacked RFE from a variety of angles. They declared it to be a CIA tool and an instrument of imperialism, published slanderous books about it, blocked its signal (a process known as jamming), arrested those who sent it information and even tried to infiltrate its staff. Machcewicz argues that the campaign against RFE was a constant of the Communist era. Although Poland stopped jamming RFE from 1956-1971 and again in 1988, the Communist regime devoted significant resources to undermining the station from the mid-1950s up until the moment of its demise.

Surprisingly, operations against RFE were the least well organized in the Stalinist era. Poland began to jam the station in 1951, at Soviet instigation. The active repression of listeners was also highest in this period. While private listening to foreign radio stations was never banned, listening in groups or publicly talking about broadcasts was illegal. Between 1950 and 1954, over 40,000 people were sentenced to a year or more of hard labour for such offences. These actions were directed against Western radio in general, however, not RFE in particular. This changed in 1954, when the station broadcast a series of interviews with Józef Światło, a high-ranking secret police officer who defected to the West. After the Światło affair, Polish Communist party leaders and the security apparatus began to see RFE as a crucial source of Western propaganda and sabotage. Beginning in the 1960s, the Ministry of Internal Affairs identified RFE as a key threat to the socialist regime. Through the 1980s, Ministry officials believed RFE played an instrumental role in creating opposition to the socialist state. For this reason, efforts to undermine RFE continued, despite changes in domestic leadership and the existence of détente.

Throughout the book, Machcewicz concentrates on how the Polish security services attempted to neutralize RFE's 'ideological-political sabotage' (106). They made many attempts to place agents inside RFE's Polish service. They approached RFE employees, their friends and relatives, and other individuals in the Polish émigré community who might be hired by or gain access to the station. The surviving documents show that they were able to gain a number of assets at the station, although they never had a high-level informant on the Polish desk. Their biggest success was with Andrzej Czechowicz, who had fled Poland in 1964, but quickly regretted his decision and wanted to return home. His collaboration with the secret police was apparently the price of his return. After agreeing to be an agent, he was hired by the RFE research department and worked there until 1971. During that time, he passed a variety of information on to Polish intelligence. The Ministry of Internal Affairs then used his 1971 return to Poland for propaganda purposes. Czechowicz gave numerous interviews and published a tell-all book (ghost written by ministry officials) that portrayed RFE employees as American agents, cynical opportunists, and 'Zionists'.

Slandering RFE employees was an important element of anti-RFE propaganda. Machcewicz argues that one of the most successful efforts in the anti-RFE campaign was the attempt to present Jan Nowak, the first director of the RFE Polish service, as a Nazi collaborator. When Nowak resigned in 1975, the Polish secret police believed their disinformation campaign against him was responsible. While Machcewicz does not concur, he does contend that the campaign played a significant role in heightening tensions among RFE staff, which was a factor in Nowak's departure.

RFE relied on sources inside Poland to provide information for its broadcasts. As a key element of the anti-RFE campaign, the secret police tried to silence RFE's Polish sources. Machcewicz devotes a chapter to a case study of one such operation: Operation Olcha, which investigated Władysław Bartoszewski. A former member of the political opposition, Bartoszewski began to send information to RFE in 1963. A large network of associates helped him to get his reports out of the country. The security services created an elaborate surveillance network around Bartoszewski and eventually arrested him and several others. In the end, however, charges were never filed, presumably because of the fall of Gomułka in 1970. Other targets were not so lucky. Józef Szaniawski was convicted of espionage in 1986 for giving information to RFE employees, who were portrayed as American agents.

The book is based largely on documents from the Polish security services, supplemented with materials from other Polish and American archives, including the collections of RFE itself. Since many of the pertinent records were destroyed in 1989, the documentary record is necessarily fragmentary. This unfortunate circumstance is perhaps partly responsible for the somewhat haphazard nature of the narrative within the individual chapters, which often seems to follow the trail of the available evidence more than any other clear rationale.

In his conclusion, Machcewicz argues that the story of Poland's campaign against RFE shows that totalitarianism is a valid paradigm for describing the entirety of the Communist period. The Polish Communist government, he says, consistently tried to control the minds of its citizens by limiting their access to alternatives and printing propaganda; whether or not they were successful, they had 'totalitarian ambitions' (285). The problem with totalitarianism is its limited analytic capability. As an explanatory concept, it does a poor job of helping us to think about evolution and change. For example, if it was so unceasingly totalitarian, why did Poland stop jamming RFE for fifteen years? By clinging to the totalitarian paradigm, Machcewicz is unable to provide a compelling answer. Much more seriously, the concept of totalitarianism clouds our ability to think about the similarities between East and West. In the totalitarian model, Communist governments tell lies in order to brainwash their citizens, while the West merely offers the truth. This simplistic picture ignores the ways in which Western 'truth' was also a complex discursive construction and, in its own way, a weapon in the Cold War battle for hearts and minds.