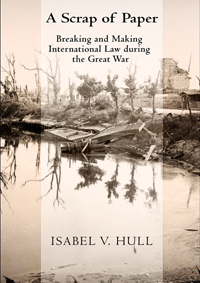 Few books published in light of the 100th anniversary of the beginning of the Great War considered international law as an important issue in contemporary political discourse. Whereas questions of war guilt (or: war responsibility) have been paramount in current scientific debates on World War I, the role of international law has only slightly been investigated cursorily. Isabel V. Hull's recent book on the status of international law - primarily: the international humanitarian law (ius in bello) - in wartime decision making in Germany, Great-Britain and France therefore can be described as a pioneering work. It is an inspiring history of the (politics of) international law and deserves a wide readership (not only) among political and legal historians.

The starting point of Hull's book is the disinterest for international law in current publications on the Great War. As Hull shows, this disinterest is not at all a new problem: Writing after 1919 had "resolutely denied or obscured, namely, that international law was central to how and why the Great War was fought" (X). [1] One objective of her book is to make modern readers aware of the central role of international law in the conflict, recorded by meters and meters of international documents and diplomatic records. In consequence, the first of ten chapters ("What we have forgotten") is about why international law was sidelined in post-1919 popular and academic writing on the First World War. Hull finds the answer in two histories of forgetting, "paradoxically" (3) linked to the British propaganda campaign during the war and to the German one after it: Since in wartime the massive and successful British propaganda campaign had been kept partially secret, the British public became distrustful and suspicious of "war-swollen" (6) government manipulation after the war, inter alia with regard to British claims against German violations of international laws. According to Hull, the public suspicion in Great Britain provided grist to the mill of the German foreign office (Auswärtige Amt), where a propaganda campaign against the "'war-guilt lie'" (11) was institutionalized in the "Guilt Office" (Schuldreferat, initially: Spezialbüro Bülow). The task of the Schuldreferat was to clandestinely dominate public and scientific debates on the origins of the Great War - in Germany and abroad. In doing so it succeeded in shifting public attention away from evident German violations of international laws to the more complicated question of war guilt and responsibility. The German revisionist history of forgetting international law was, and still is, especially successful in the United States and in American political "realism", argues Hull. The British and German propaganda campaigns were complementary in the process of forgetting international law: "The first made international law the centerpiece of attention, the second erased it." (3)

Against this traditional anti-legal spirit in the history of the Great War, the majority of Hull's book deals with the role of law in wartime decision making in Germany, Great-Britain and France, whereas the origins of the war are barely mentioned. Isabell V. Hull's argumentation begins with a chapter on "an international crime" (16), Germany's violation of Belgian neutrality. Here the reader can find the basic argument of Hull's book: According to it, Imperial Germany had developed an own tradition of international legal theories whereby it became "an extreme outlier" (331) in the international community. Following Hull, this development became particularly obvious in the German breach of the 1839 treaty guaranteeing Belgian neutrality, "a strong document deeply embedded in the European legal order" (20), in 1914. Hull convincingly outlines the changing political attitudes in Germany towards the international legal framework from Bismarck to Bethmann Hollweg. In this period political preferences shifted from commitments to international legal principles to a subjective, hyper-realist understanding of "military necessity" shaped by military leaders like General Julius von Hartmann and lawyers like Carl Lueder or Albert Zorn. As Hans Wehberg noted in 1910, the view "that war necessity stands above the law of war" was generally recognized in the German literature, but was rejected by "practically all foreign writers" (78). After Bismarck, German national security was largely defined by the military. Military necessity is an old concept of international law as a justification of unlawful acts in case of a vital danger (e.g. self-defence) - the German Schlieffenplan, first developed in 1897, hardly met these criteria, as argues Hull. According to Hull, Chancellor Theobald von Bethmann Hollweg's description of the Belgian neutrality as a "scrap of paper" in the presence of the British Ambassador in Berlin Goschen on 4th August 1914 "was an adequate summary of what the war was actually about." (43)

Hull's following chapters - inter alia on the "Belgian Atrocities" (3.) and "Germany and New Weapons: Submarines, Zeppellins, Poison Gas, Flamethrowers" (7) - are also fortunately written in a very concise manner. From the perspective of international legal history the combination of political and scientific discourse, of doctrine and practice is very laudable. Hull's comparative approach not only lessens the danger of one-sidedness, it also helps to understand why and how far German legal politics differed from the British and French. Of course violating international law or sometimes acting on the basis of military necessity was nothing unfamiliar to British politics. According to Hull, violating the law was nevertheless "an embarrassment" (206) to the British self-conception as a law-abiding state. In contrast to Imperial Germany, Hull describes Great-Britain as part of an international (legal) society - which it aspired to lead. However, it would have been worthwhile to discuss in how far the British politics of international law were also claims to power or at least a mixture of universal norms and national interests more intensively. [2] One cannot only argue that Great Britain aspired to lead the international society, one could also argue that, in contrast to Imperial Germany, it was also in the power-political and economic position to do so. Therefore the criticism raised against Hull's chapter on "Great Britain and the Blockade" (5) in some previous reviews, is not implausible: The British blockade caused more than 300.000 deaths among German civilians. [3]

However Hull's critical juxtaposition clearly shows Imperial Germany as unable "to speak the same legal language as the rest of Europe." (331) While British international-legal writers agreed on a strict limitation of legal justifications linked to military necessity, the German construction of military necessity allowed decision makers to avoid and break international law. The interconnection of legal, political and military discourse in Germany furthermore made it possible not only to push law aside, but to politicize it. Not only did the German civilian leadership reject international law as a significant argument against unrestricted submarine warfare; the use of flame throwers was also seen as a more "effective", that is a more "humane" form of killing in accordance with article 23(e) of the First Hague Convention (1899).

Against this backdrop, too, Isabell V. Hull's narrative of Imperial Germany as "an extreme outlier" (331) in the international community seems to be very plausible. The author presents a well-documented and thrilling elaboration of this thesis. Hull's book suggests a reconsideration of the importance of international law and therefore of the "realist" theory of international relations, which, as the author describes it, wrongly accepted Imperial Germany as a model of the state - and which therefore became an anti-legal theory after Hans Joachim Morgenthau. Therefore Hull's excellent analysis might also contribute to a more differentiating view on the nexus of politics and law in international relations from a historian's perspective.

[1] James Wilford Garner's International Law and the World War (1920) was an exception, which has not been updated so far, as Hull regrets (cf. X).