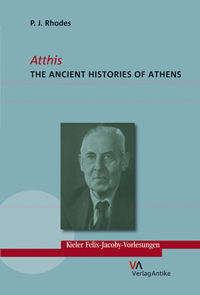 The great German scholar, Felix Jacoby, spent his early teaching years (1907-1935) at the Christian-Albrechts-Universität in Kiel, until he was compelled to flee to Oxford during the Nazi period. After the war, in 1956, he returned to Kiel, where he had been made an Emeritus Professor. In recognition of Jacoby's long association with and devotion to the University an annual lecture series in his honour has been established (the Felix Jacoby Vorlesungen). The work reviewed here is the second such lecture, delivered in 2013.

The volume opens with a one page introduction (9) to the lecture series and its purpose by the editor, Josef Wiesehöfer, who also contributes a resume of the career and works of Felix Jacoby (37-45) and a brief biography of the lecturer, Peter J. Rhodes (46-7). In between is the text of the lecture (11-35).

The lecture is on the subject of the Atthidographers, the modern name for a group of authors who wrote the local history of Athens from mythical times to their own day, a genre that at some time in the Hellenistic period acquired the name, Atthis. It was a well-chosen subject, since the study of this genre of historiography was one of Jacoby's major contributions. Jacoby began his monumental collection of the fragments of the Greek historians (Die Fragmente der griechischen Historiker, hereafter FgrHist) while he was at Kiel and continued his work at Oxford. There, he especially focused his attention on the Atthidographers and in 1949 published his special study of them, under the title Atthis, and later, in 1950, edited their fragments and testimonia in FgrHist 3b, followed by an extensive commentary and notes in two supplementary volumes (FgrHist 3b. suppl. 1 and 2) in 1953-4.

Interest in these local historians had been generated by the discovery and publication of the papyrus containing the Constitution of the Athenians (Athenaion Politeia) in 1891. The first 41 chapters of this work were a review of the evolution of the Athenian constitution down to the democracy that pertained in the fourth century. Scholars immediately began to search for the source(s) of this material. Most influential was the theory advanced by Jacoby's mentor, Ulrich von Wilamowitz-Moellendorff, who argued in his book Aristoteles und Athen (1893) that a large part of the information came from the work of writers of the Atthis, whose accounts were based upon a publication by an unknown author early in the fourth century of a pre-literary chronicle of decidedly democratic inclination, preserved by a priestly class of exegetai (expounders). In his Atthis Jacoby demonstrated that this view was totally unfounded and replaced it with the view that held the field for the next 50 years, namely that the individual Atthidographers were creating their own accounts, but these were influenced by political bias. His thesis of the 'political conception' of the Atthis was that each writer challenged his predecessor's interpretation on political grounds. They were able to do this because little documentary evidence for early Athenian history survived. In the last decades of the 20th century Jacoby's view has been criticized by Philip Harding, the author of this review, who Rhodes graciously acknowledges as the "scholar who has done the most work on the Atthidographers since Jacoby" (14).

Harding has argued that Jacoby's idea of the 'political conception' of the Atthis was, in its turn, not supported by the evidence of the fragments and maintained, instead, that the individual authors wrote with different emphases, but not out of political bias. Some devoted more attention to the mythical period, others were more interested in the history of their own time. This latter was especially true of two of the most respected authors, Androtion and Philokhoros. Harding also argued that the Atthidographers used documentary evidence, wherever they could find it, and that there was a substantial amount available, much more than Jacoby and others had allowed for. He also returned to the view that all Atthidographers wrote from a patriotic and democratic point of view.

In his lecture Rhodes sets out to evaluate these competing theories and place them in the context of current views of Greek historiography. Typically, he arrives at a judicious balance. He agrees with Harding that the Atthidographers did not write with a political purpose, but holds that they may have had different political interpretations of particular events, since no historian can write sine studio. He also provides evidence for the existence of a substantial amount of documentation even as far back as the time of Drakon and Solon, and accepts that on occasion the Atthidographers used this material, but perversely maintains that their use of documents, was "in order to amplify and fill in the tradition rather than as the basis of their history" (34). Rhodes also believes that the Atthidographers were patriotic and democratic, but only because that was the way Athenians were, not out of any ideological purpose (34).

My only criticism of this otherwise measured study is that Rhodes continues in the footsteps of both Wilamowitz and Jacoby in viewing the Atthis through the lens of the Athenaion Politeia. This is, perhaps, not surprising, given the focus of much of his own work. But, the Atthis was so much more than a source for Aristotle. It was the cumulative story of Athens from the earliest times to the death of the last Atthidographer, Philokhoros, in 262/1, and covered the mythical origins of its cults and customs, its settlements, traditions, topography, genealogy, proverbial sayings, as well as its wars and politics. It was, in essence, the very narrative of what it was to be an Athenian.

Despite this last reservation, this slight volume is a sober, well-researched analysis by a highly respected scholar. It is a fitting tribute to Felix Jacoby, who made study of this subject accessible, and in whose honour the lecture was given.