James W. Pardew: Peacemakers. American Leadership and the End of Genocide in the Balkans, University Press of Kentucky 2018

Richard A. Moss: Nixon's Back Channel to Moscow. Confidential Diplomacy and Détente, University Press of Kentucky 2017 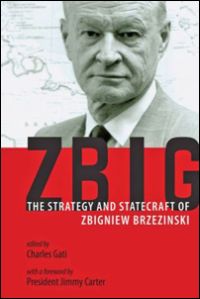 U.S. foreign policy history often depends on the declassification of secret documents eagerly awaited by historians because these texts might shed new light on old issues. Zbig. The Strategy and Statecraft of Zbigniew Brzezinski, edited by Charles Gati, does not shake the foundations of U.S. foreign policy history. Rather, it provides, via a large and diverse number of essays often written by contemporaries and friends (including Stephen F. Szabo, chapter 15, and Francis Fukuyama, ch. 16), insights on Zbigniew Brzezinski: international relations scholar, former National Security Advisor, and sought-after elder statesman.

Jimmy Carter's term of office is often seen as one of the less successful presidencies. Its successes - the 1977 Panama Canal Treaty, further normalization of relations with the People's Republic of China, or Camp David - are overshadowed by the moral, economic, and energy Crisis of Confidence of the post-Vietnam, post-Watergate era, followed by renewed Cold War tensions (the Euromissile Crisis and the Soviet invasion of Afghanistan). Moreover, the 1979 Iranian Revolution, the Teheran Hostage Crisis, and the 1980 Carter Doctrine hailed the advent of international Islamic terrorism and continued U.S. energy dependence on the Middle East - issues that continue to haunt the United States a quarter century later.

Zbigniew Brzezinski - or, as friends are allowed to call him, "Zbig" - functions as a link between the Cold War era and today, as the publication under review underlines. Divided into four large parts - "From the Ivy League," "To the National Security Council," "The Policy Advocate," and "Portraits" (including an interview with Brzezinski by the editor) - Zbig spans over half a century of U.S. foreign policy. In these 65 years, Brzezinski "only" played an "active" part in a U.S. administration's U.S. policy-making for four years; but, as Zbig shows, this role is at least equaled, if not surpassed, by his role as a foreign policy intellectual scholar who regularly comments on his times - times that changed dramatically, from different stages of the Cold War to today's "war on terror."

As Part I delineates, the intellectualism of Zbig is frequently compared with his predecessor in office, academic colleague, friend/foe, and fellow Americanized immigrant Henry Kissinger, five years his senior. Born in Warsaw in 1928 and son of a Polish diplomat, Zbig was in Canada before World War II broke out in Europe and wrote his dissertation in Sovietology at Harvard, a typical academic field in the U.S. Cold War university of the 1950s. Both Brzezinski and fellow Harvard scholar Kissinger tried to enter policy-making via being policy analysts first.

In the 1960s, Brzezinski made a name for himself via various books on the Soviet system. These publications showed that he stayed true to certain ideas but could also change and adapt them over time. Zbig became a premier foreign policy analyst even enjoying TV airplay - typical of an era when television as a mass media medium became important, as the presidential debate between Kennedy and Nixon shows. And like U.S. presidents who, according to their party affiliations, differed on domestic issues but had to be Cold Warriors in foreign policy, Zbig was always a proponent of securing U.S. interests abroad. After working for the Democratic campaign in 1968, Brzezinski advised the Nixon Administration before he finally became Carter's National Security Advisor.

The Carter years, naturally, figure prominently in Zbig's second part. Here, some caution is necessary, as not only Carter himself wrote the book's foreword - naturally praising Brzezinski - but also because some authors actually worked under/with Brzezinski during these years (e.g. Robert Hunter, ch. 8 and James Thomson, ch. 9). Their criticisms are few; in general, most authors highlight the actual successes of the Carter administration (and how Zbig and his staff contributed to them) such as the Panama Canal (David J. Rothkopf, ch. 4). Still, these chapters provide highly interesting first-hand insights into how Brzezinski and his staff (as well as Carter) worked. A frequent issue, as in other publications [1], is that of the alleged rivalry between Zbig and Secretary of State Cyrus Vance. The contributions in Zbig, though, try to downplay this rivalry between the State Department and the NSC, rather seeing it as conducive to U.S. foreign policy. And the foreign policy issues faced by the Carter administration were manifold, as insightful chapters on U.S-Soviet and U.S.-Chinese relations (ch. 8) and the Middle Eastern peace process (William B. Quandt, ch. 7) show.

In the post-Carter years, dealt with in the third part of Zbig, Brzezinski took on the role of foreign policy intellectual again, working in academia, but also giving his advice to later administrations - both Democrat and Republican - when it was sought. And because every president did seek it, this shows that Brzezisnki was and is above bipartisan politics - the champion of his foreign policy thinking are American interests, a point made throughout the book's contributions.

As an expert on Soviet policy since the beginning of his academic career, Brzezinski constantly made up his mind over how the Soviet Union functions - and when and why it would not function again. It is a major merit of this publication to show, throughout the book's various articles, how Brzezinski's view of the Soviet Union changed. It therefore adds to the intellectual history of the Cold War because Brzezinski's thinking shows the importance of new social sciences as well as reflects upon the climate of estimation and mistrust of the Cold War where each side tried to guess the other side's intentions and capabilities. Overall, Brzezinski seems to have had outlooks that became true (Marin Strmecki, ch. 11); still, in some cases he was off the mark. Nevertheless, shedding light on Brzezinski the foreign policy intellectual is one of the most valuable insights Zbig offers.

In the changed world of the post-Cold War era, Brzezinski continues to be a sought-after commentator, especially post-9/11 (his role in the 1990s is, unfortunately, only scratched upon). He criticized the George W. Bush administration and has given advice to Barack Obama. A point of critique made is that Zbig, never really interested in the western hemisphere, allegedly knows Moscow better than America's neighbors to the south, and that he did not change from his Cold War bi- to a multipolar outlook on the world; still, he is often able to see the bigger picture (Adam Garfinkle, ch. 14).

Zbig. The Strategy and Statecraft of Zbigniew Brzezinski is a valuable contribution to the field of U.S. foreign policy history since 1945 because of Zbig the intellectual, the policy-maker, and the commentator, who has been actively engaged from the beginning of the U.S-Soviet post-World War II confrontation to the "war on terror." Taking the rather anecdotal and personal nature of some contributions with a grain of salt (and wondering why ch. 14 talks about Wilson's "Thirteen Points"), and while the actual outcomes of Zbig's policy-making efforts might not surprise students of U.S. foreign policy, Brzezinski's role as a Cold War scholar and intellectual, the descriptions of how it was to work (and study) under him, and his elder statesmanship as delineated in Zbig add to the study of not only Zbig himself but U.S. foreign relations in general.