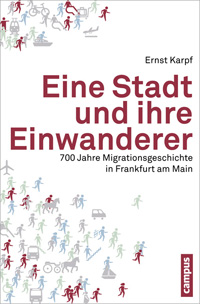 Most migration historians recognize that the movement of people has played a central role in the evolution of human society. At the same time, research by a variety of scholars working not simply on the USA but, increasingly, on European nation states including Germany, France and Britain, has come to the conclusion that migration from beyond the controlled borders which emerged during the course of the nineteenth and twentieth century, has played a determining role in the demographic history of such states, both before and after 1800. Similarly, a classic Ph.D thesis in migration, especially in the social sciences, but also in history, involves choosing an urban location, whether metropolitan such as London or Paris, or provincial, and examining a particular minority group within this location over a relatively short period of time.

However, few, if any, studies have tackled the migration history of a city over hundreds of years. For this reason, we should welcome the appearance of Ernst Karpf's examination of the movement of people's into Frankfurt since the thirteenth century. This actually appears a longer version of a volume which first appeared in 1993, with an additional chapter on the important developments which have taken place since then. However, Karpf must have carried out much more work as the new book is almost three times as long as the original Und mache es denen hiernächst Ankommenden nicht so schwer: kleine Geschichte der Zuwanderung nach Frankfurt am Main. The 2013 edition, contains 133 pages of footnotes together with a bibliography of 15 pages.

Karpf understandably takes a purely chronological approach, beginning with the Middle Ages, in which he gives an outline of Frankfurt's history and focuses upon Jews and the arrival of migrants from near and far in the evolution of the city's population. A longer chapter then tackles the early modern years, 1500-1800, during which time Jews moved in and out of the city, which, like everywhere else in continental Europe, became affected by the Reformation and Counter-Reformation, which manifested itself in the arrival of Protestant refugees from the Low Countries. Karpf deals with the nineteenth century (1800-1914) in relatively little detail and only devotes 20 pages to the years 1914-45. One of the most disappointing aspects of the book consists of the 7 pages on the Nazi period, despite the fact that Frankfurt, like every other German city became dependent upon foreign labourers.

As we might expect, in view of the scale of migration which has taken place since 1945, considerably more than half of the volume tackles the period since the end of the Second World War. Karpf constructs his narrative along the generally accepted caesuras of post-War German history, especially its evolution in terms of migration. Thus, he tackles the refugee crises of the early post-war years involving both displaced persons and Germans expelled from Eastern Europe, which takes us up to 1960. We then have a section on 'Die Zeit der "Gastarbeiter"', which ends in 1974 and focuses upon the early history of 'Gastarbeiter' until their recruitment ceased. The chapter on the years 1974-89 deals effectively with issues of integration, as well as pointing to the increasingly global nature of migration into the city, especially as a result of growing numbers of asylum applications. The final chapter, covering the years since the collapse of the Berlin Wall, recognizes not simply the arrival of new (or perhaps, more accurately, old) groups from Eastern Europe in the form of ethnic Germans and Jews, but also the consequences of increasing globalization. Particularly as a result of its role as one of the most important financial capitals in the world, Frankfurt has attracted a growing number of internationally mobile professionals.

We therefore need to welcome Karpf's book. It offers an insight into the changing nature of migration by examining it within the context of broader European and, increasingly, global developments. While the medieval and early modern period witnessed the arrival of newcomers from a fairly limited radius, which did not extend much beyond the town's hinterland, the twentieth century in particular meant an increasingly Europeanised and then globalised migration system. By reading the volume, we can appreciate the way in which the local interacts with the European and the global. Migration evolved as the city became linked to a European and global economy. However, Karpf does not simply focus upon the economics of migration, as much of the narrative tackles the arrival of those moving for 'political' reasons, whether medieval Jews, early modern Protestants, or twentieth century refugees.

As well as looking at the reasons and mechanics of migration, Karpf also, throughout, tackles two of the key themes with which those who study the movement of people concerns themselves, in the form of persecution and integration. When dealing with medieval Jewry these form the two central topics. Karpf deals particularly well with the way in which integration took place for newcomers after 1945, as well as their descendants. In fact, throughout, the narrative takes an intergenerational approach, demonstrating that the integration process takes time.

The narrative, however, remains rather dry. The reason for this lies in the fact that he has based his research primarily upon government sources. He makes an effort to bring his writing to life especially through the use of tables and maps throughout, which prove useful and enlightening. However, he uses relatively few personal stories. When he does, the text becomes particularly interesting, as when he quotes the experiences of an Indian who found himself living near the station in 1978 (206-8). This is actually a 2 page extract. In fact, this represents one of many similar lengthy extracts, which really needed shortening.

Nevertheless, Karpf has produced an important volume on the history of migration into one of Europe's most important cities. He focuses upon the key themes which concern migration historians throughout, especially integration. By reading this encyclopaedic volume, we can discover every migrant group which moved into the city over the past 700 years from medieval Jews to twenty first century professionals. Most importantly, Karpf has demonstrated the close relationship between urban development and immigration over a long time period.