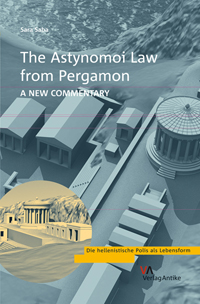 One of the most remarkable public documents to survive from the ancient Greek world is the so-called 'Astynomic law' from the city of Pergamon in north-western Asia Minor. This long text is a set of regulations concerning the municipal administration of Pergamon, with a particular focus on the duties of the city's astynomoi. The astynomoi were the civic officials who oversaw the day-to-day running of the town: waste-collection, house-planning, street-repairs and so forth.

The document provides us with a vivid picture of the quotidian inconveniences of ancient urban life. Some are unexpected: the theft of paving-stones was apparently a major problem at Pergamon, and streets were sometimes blocked by builders making bricks or moulding clay in the middle of the road. Others are more predictable: any reader who has battled against ivy in their garden will understand why Pergamene law forbade the planting of any climbing plants against a neighbour's wall. To judge from the eye-watering fines laid down in the Astynomic law, the Pergamenes seem to have had an unhygenic habit of watering their animals and washing their clothes at public fountains.

The surviving fragments of the Astynomic law were discovered in the lower agora of Pergamon in 1901. Some 237 lines survive, representing perhaps half the original text of the law. Although the inscription dates to the second century AD, the law itself seems to have been passed by one of the later Attalid monarchs, perhaps Eumenes II (ruled 197-159 BC). Most likely the law had simply never been superseded, and was still in force when it was finally inscribed on stone some three hundred years later. Likewise, an early Hellenistic law on inheritance at Dura-Europos in Syria seems to have remained current as late as the third century AD (P.Dura 12).

Sara Saba's new book is the first substantial treatment of the Astynomic law for more than fifty years. After a short introduction outlining modern scholarship on the text and problems of dating (11-18), the volume includes a Greek text and translation (19-31), a detailed commentary (32-86), and an extended essay on astynomoi and similar magistrates elsewhere in the Greek world (87-117). A short conclusion (118-20) and a three-page appendix on a mysterious fragment of an astynomikon biblion preserved in Justinian's Digest (121-4) are followed by bibliography and the usual indices (125-49).

It is certainly helpful to have an up-to-date summary of recent work on the Astynomic law, and on the civic administration of Hellenistic Pergamon more generally. In the past twenty years or so, the work of Helmut Müller and Michael Wörrle (used extensively by Saba) has transformed our understanding of the institutions of Attalid Pergamon. But other aspects of the book are more problematic. The translation is often unclear or simply erroneous: in many passages the author has simply not understood the meaning of the Greek. [1] So for instance at Column II, lines 72-6, the law forbids the inhabitants of Pergamon from damaging or blocking public streets. Saba translates "if people dig rubble or stones in the streets or make mud or remove bricks or uncover conduits, the amphodarchai shall stop them"; the passage is in fact concerned with people who "dig up soil or paving-stones in the streets or make clay or make bricks or lay out open drains" (plinthous helkein means to make bricks, not remove bricks: Hdt. 1.179).

Much of the urban centre of Pergamon was laid out on artificial terraces on a steep hillside. A long passage of the inscription (Column III, lines 132-59) is concerned with the building and legal status of peristaseis, narrow covered chambers built around the outer foundations of private houses. Saba's treatment of this passage is particularly unhelpful. The reader is given no clear sense of what these chambers were for: protection against damp? Or a means of preventing the terraced soil under the foundations from bulging outwards and collapsing? On one point, her interpretation here is demonstrably wrong: in lines 142-4, the law forbids making the foundations of the peristaseis "higher than the open ground outside, except as much as is necessary to let the water drain away"; Saba translates this as "they shall not make the foundation higher than the rest of the courtyard, lest they block the water".

One of the most startling features of the astynomic law is how similar it is - right down to minor details of vocabulary - to two other texts, the account of the duties of the fourth-century BC Athenian astynomoi in the pseudo-Aristotelean Athenaion Politeia (50.2) and an alleged extract from a mysterious 'astynomikon monobiblon of Papinian' preserved in Justinian's Digest (43.10.1). Saba explains these similarities on the basis that "properly maintaining a city meant attending to basic needs that are timeless" (123), and she warns the reader against assuming that there was an "Athenian template" which the Pergamene astynomoi were following (89).

I am not convinced. The three texts seem to me to share so many details of content and phraseology that it is hard to deny some direct influence. The institutions, ideology and art of classical Athens were widely imitated in the cities of the Aegean in the second centuries BC. The Attalid dynasty claimed a particularly close connection with the Athenians, paying for numerous public buildings and monuments at Athens, and presenting Pergamon as a kind of 'New Athens' in the East. Might the Astynomic law be seen as yet another aspect of this self-conscious Attalid emulation of the classical Athenian polis?

Historians of the Attalid kingdom and of the institutions of the ancient Greek city will find much of use in this book, but readers are advised to treat the translation and commentary with caution.

[1] The most reliable English translation of the Astynomic law remains that of M. Austin: The Hellenistic World from Alexander to the Roman Conquest (2nd edition, 2006), no. 253.