Clifford Ando: The Matter of the Gods. Religion and the Roman Empire, Oakland: University of California Press 2008 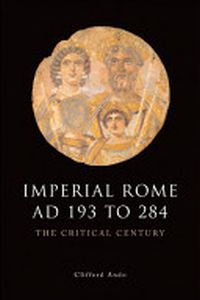 The eight-volume Edinburgh History of Ancient Rome series provides students and scholars with a chronological overview of Roman history from its early beginnings to the death of Justinian in AD 565. It promises to "encapsulate the ever-changing identity of Rome" and to "provide overall unity to its dramatic history". These promises are certainly fulfilled by Clifford Ando's Imperial Rome AD 193 to 284: The Critical Century, which, as the sixth volume in the series, has the difficult and unenviable task of describing and interpreting the events and developments of the chaotic period which has often, but controversially, been denoted as the "crisis of the third century". [1]

In the introduction, Ando states that his aim is "not to rehearse a narrative of war and action, but to explore and explain broad-scale changes in state and society". (2) Four levels of transformation are briefly touched on, although the author points out that the list is not exhaustive: the increase in border attacks, threatening the Empire's territorial integrity and leading to experimentation at all levels of government; the disastrous effects of the lack of well-articulated and -sustained rules of imperial succession; the consequences of Caracalla's extension of citizenship to all free-born residents of the Empire in AD 212; and the dramatic changes in the religious landscape of the third century. Wisely, Ando does not choose between a strictly chronological or thematic approach to analyze these and other long-term developments, but employs both strategies in turn, alternating narrative chapters focusing on politics and war in periods of roughly two decades each with thematic chapters discussing broader phenomena over long stretches of time. Such a structure could easily have underplayed the causal interdependence between short-term events and long-term transformations, but the author avoids this risk remarkably well by placing both types of chapters in strategic sequence - for instance by inserting a chapter on law and citizenship once the political narrative has reached the Antonine Constitution.

The chapters 2, 3, 5, 7 and 9 deal with the political and military turmoil of the period AD 193-284, discussing the immediate fallout of Commodus's assassination and the reign of Septimius Severus (AD 193-211), the reigns of the succeeding Severan emperors (AD 211-235), the period from Maximinus Thrax to Philip the Arab (AD 235-249), the period from Decius to Gallienus (AD 249-268) and the period from Claudius Gothicus to the rise of Diocletian (AD 268-284). Through his engaging narrative, Ando succeeds in shedding light on the complex, confusing and often badly documented events of the third century. In doing so, he does not shun harsh verdicts. Hence Caracalla's reign is characterized as "notable almost exclusively for financial mismanagement, rapine, theft and massacre, and for continuing a militaristic foreign policy [...] that sowed the seeds for defeat and disaster for decades to come" (58-59), so that the emperor's death occurred "in suitable ignominy but not soon enough". (63) Such characterizations make the actors in this historical drama come alive, promoting them from mere names in a long list of rulers to living, breathing people with their own quirks and faults. Probus, for instance, was perhaps not a lazy ruler, "but it may be that he was very bad at his job". (221). Ando also has a knack for enlivening his narrative with touches of unexpected humour; one cannot help but smile when reading that "Carus suffered the finest imperial death of the third century [...]: he was struck by lightning." (222)

The chapters 4, 6 and 8 have a thematic focus. In the fourth chapter, the author discusses law, citizenship and the Antonine revolution, examining how it transformed the relations between the state and its subjects. Chapter 6 deals with religious changes, such as the tension between the traditional concept of religio, which was tied to a specific civic community, on the one hand, and the increasingly heterogeneous composition of such communities on the other, leading to an "enormous explosion in extra-familial but non-political religious groups" (132). Ando provides a lucid analysis of Decius's decree, analyzing how the imperial demand to confirm one's membership of Roman society through an act of sacrifice conflicted with Christian devotion to a monotheistic god. Government and governmentality take central stage in chapter 8, which deals not only with the state's increasing penetration in local and regional life, but also with "its power to condition the self-understanding and self-fashioning of persons, in themselves and in their social and economic relations." (177) Ando's tremendous knowledge of the detailed workings of Empire really comes to shine in these chapters, which contain numerous citations from literary texts, papyri and inscriptions to highlight changes in mentality on all levels of government and society.

In the conclusion, the author returns to an inevitable and much-debated question: to which extent did the period under discussion constitute an empire-wide crisis? Having uttered great appreciation for empirical research on the third century in the introduction, in particular for the work of Christian Witschel [2], Ando now takes issue with scholars who put too much emphasis on the continuity of social and economic life, who neglect textual sources in favour of material evidence, and privilege regional over macro-regional assessments. He stresses the strong connectivity between different parts of the Empire and the deep impact that state institutions could have on a local level, arguing that the political upheaval of the period AD 193-284 caused "profound damage in nearly every province of the empire" (224), that the aggregate effects of civil wars and foreign invasions were "enormous", and that in both East and West, third-century demography clearly displays "signs of retrenchment and retreat" (225). Yet at the same time, Ando adds, it is evident that "in very significant respects, the political culture of the empire remained unitary" (225). There was great continuity in the ideology of imperial government, as well as in the expectations and demands expressed by its subjects. It was in large part due to these factors that the Empire managed to weather the third-century-crisis.

At the end of the book, the author provides a short, but adequate guide to further reading on the period AD 193-284, introducing important sources as well as key modern studies. Readers are well served by the bibliography, which does not limit itself to English titles, but also includes many works in French, German and Italian. A list of emperors and usurpers and a detailed chronological overview are welcome additions for those who have difficulty keeping track of the multitudinous rulers, rebellions and invasions of the third century - which, one imagines, is almost everybody. The book is also enriched by four maps and several black-and-white images of coins, buildings and other material remains, most of which are of sufficient quality. (Figure 10, featuring a relief of the Persian King Sapor, is a regrettable exception.)

The Critical Century is highly recommended for English-speaking students, but the volume has enough substance to be of interest to more advanced scholars as well. Together with Olivier Hekster's 2008 source book [3], it provides an excellent gateway to one of the most confusing and intriguing periods in Roman imperial history.

[1] For an overview of the debate concerning the suitability of this term, see Wolf Liebeschuetz: 'Was there a crisis of the third century? ', in: Olivier Hekster / Gerda de Kleijn / Daniëlle Slootjes (eds.): Crises and the Roman Empire, Leiden 2007, 11-20.