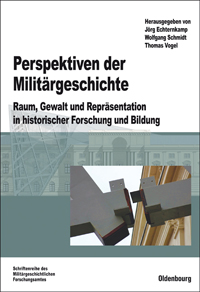 In connection with the fiftieth anniversary of the Militärgeschichtliches Forschungsamt of the German Federal Republic a conference held in Potsdam in September 2007 led to the publication of this collection of papers and commentaries on them. Divided into six broad categories, the papers cover a wide range of topics. A listing of the twenty-eight titles and comments will not be helpful to readers. Instead, this review will focus on some major issues covered by several of the papers.

A major theme of several pieces is the postwar development of German military history and its relationship to military history and its institutions in other countries, especially England, France, and the United States. Curiously, only the specific essay on American military history mentions without serious discussion the massive official projects on the history of World War II in that country and England. In the papers on "Space" (Raum), there is a very helpful review by Leighton S. James of the extent to which the letters and diaries of German and Austrian soldiers during the wars of the French Revolution and Napoleon provide information on and insight into the way the authors perceived the sections and peoples they encountered as they moved across the continent. The paper of Gerhard P. Groß has some helpful things to say about the influence of Germany's position in the middle of Europe on German military planning but is marred by some bad errors and a map of NATO and the Soviet block that cuts off the one point in northern Europe where a NATO country actually bordered on the Soviet Union.

A thoughtful comparison of the way the drive toward the mobilization of mass armies affected the British and Habsburg empires by Jörn Leonhard would have benefitted from reference to the Vimy Monument on Parliament Hill in Ottawa and the commemoration of ANZAC Day in Canada. Informative papers review issues of war crimes in the two World Wars, the role of women in war, and the somewhat unusual regulations and procedures governing conscription in the Russian empire. A substantial series of papers engages the way in which societies, but especially those in Germany, have pictured and commemorated by memorials their military past; and the coverage of this topic concludes with a review of the special character of the new military history museum in Dresden by Gorch Pieken.

The volume as a whole offers the reader a wide variety of perspectives on issues related to the way Germany in the past and currently engages military affairs in memory, pictures, historical works, and museums. This also includes some coverage of the controversies that have attended these questions over time. Of current relevance in this regard for a large number of other countries is the paper by Anke Borgmeyer on the debates about the preservation, destruction, or utilization for other purposes of the construction relics of the Cold War as illustrated by the Bavarian example. Illustrated, like some of the other essays, by appended pictures, this question is likely to be discussed and debated for years to come.

If the significance for postwar German developments in the field of military history and the tying of that field to the teaching and self-perception of the soldiers of the German Federal Republic of any one person comes to the fore in this book it is that of Hans Meier-Welcker. In some ways the volume is something of a direct and indirect tribute to him. It would have been improved by a listing of the contributors and their backgrounds.