Beat Brenk: The Apse, the Image and the Icon 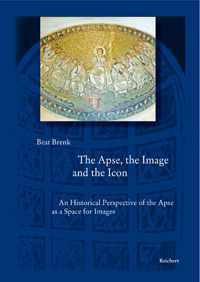 This book - written by an eminent scholar of Early Christian and Medieval art - offers a number of new perspectives on the important topic of Early Christian apse mosaics. The main goal of the text, as Beat Brenk puts it, is to analyze the apse "as a space for images" within the larger framework of "the question of the image" during the first centuries of Christian art (9, 108). This represents a methodological departure from previous studies on apse mosaics that have focused mainly on questions of iconographic typologies and influences. The central and promising method proposed here is to avoid viewing the earliest apse mosaics through the usual "medieval glasses" (i.e. from the perspective of later centuries), and instead see them as "a result of a historical process evolving out of the late Roman tradition" (29).

In the first of four chapters, Brenk aptly demonstrates the importance of the pagan aquatic realm, as seen in Roman nymphaea mosaics, for the emergence of the Early Christian apse mosaic. In what follows - somewhat abruptly - the origins of the apse mosaic are brought into a causal relationship with the Second Commandment (Ex. 20:2-17). According to Brenk, the Old Testament prohibition of figural representations impacted the "origin of official ecclesiastical art, especially in apses" (108) to such an extent that Christians were cautious about representing the human figure of Christ in church apses before 400 AD (54). Instead, they adhered to so-called an-iconic imagery, limited to depictions of animals and symbols (27). At one point Brenk postulates, that "many apses of fourth-century churches had no figural decoration at all" (54), but his earliest recorded examples of this type of "an-iconic" imagery in church apses are from the fifth century, that is the no-longer extant, but hypothetically reconstructed apses of the basilicas of Nola and Fundi in southern Italy. Although the author logically would like to believe that also the now-lost original apse mosaics in the great Roman basilicas - the Lateran, Old S. Peter's and S. Maria Maggiore - were "an-iconic", the true nature of their much debated imagery is, and remains, purely hypothetical.

Brenk avoids, however, a critical discussion of the impact of the Second Commandment on the various types of Early Christian figural imagery (i.e. narrative versus iconic), which leaves the reader somewhat perplexed. A rather curious and general statement such as "from the late fifth and sixth centuries on, the Church admitted images" (109) appears to conflict with the previously proposed 400AD turning point, and to ignore, for instance, the contemporaneously executed monumental Biblical narratives in the same great Roman basilicas as the now-lost apse mosaics believed by the author to be "an-iconic". Nevertheless, the author's hypothesis is an intriguing one. It cannot be excluded that the Mosaic prohibition influenced certain individual decorations - apse mosaics among them - but both the written and material evidence seems insufficient to draw any broader conclusions on the origin and development of an "official" Early Christian apse imagery.

The following three chapters turn instead to apses with "iconic" imagery. Brenk pursues his historical perspective by first investigating the Christian apse mosaic in relation to the Roman tradition of cult statues of gods and emperors placed before the apses in temples and imperial cult rooms. By drawing on meticulous archaeological reconstructions, the author persuasively emphasizes the tradition of the apse as a public "show-case for images" (34). To date, this is the most comprehensive analysis of the precedent pagan tradition in relation to the Christian apse mosaic.

Among the many points and observations made in the two remaining chapters, Brenk stresses his conviction that the "iconic" Christian apse mosaic has no connection to the liturgy which unfolds in front of the apse (9). This hypothetical non-existent relationship is evidently prerequisite to another claim, namely that the apse mosaic - unlike the icon in private worship - should not be considered a "cult image" (10). Instead, the apse mosaic in a church - "official" in nature and detached from the ritual - serves primarily to broadcast Christological beliefs. An example is the lost early fifth-century apse mosaic of the enthroned Virgin and Child in S. Maria in Capua Vetere, which stresses "the human nature of Jesus Christ", but "has nothing to do with the Eucharist" (76, 77).

These contentions raise a number of issues. It is difficult to see why an apse image configured to emphasize God's incarnate presence should bear no association to the bread and wine of the Eucharist celebrated on the altar in front of the apse. It also remains unclear precisely what Brenk intends by "cult image", especially when he polemically states that the focus on "cult" in modern scholarship is "uncritical" (84). Paradoxically, however, the author invents the curious expression "visual cult" for what is the awe-inspiring impression made on the viewer by a statue or image in the apse, a rather general assumption that receives no further discussion (36). In fact, despite the promise that the book "particularly investigates the participation of the viewer" (110) (repeated on the back cover), this important theme is only very sketchily explored.

While not always clearly defined or articulated, Brenk's overall attempt to separate the apse mosaic from the icon - thereby essentially underscoring the apse mosaic as a genus of its own - remains a worthy and important enterprise. Still, the author seems more concerned with what the apse mosaic is not than with the apse mosaic per se. Thus, besides arguing for a few later apse mosaics as ex votos and propaganda for new saints, the significance of the Early Christian apse mosaic for Brenk largely boils down to its being a statement on Church dogma, and generator of a "visual cult". Although most scholars would probably agree that both Christological doctrine and the viewer's awe are relevant to a discussion of the Early Christian apse mosaic, the application of approaches that go beyond the historical perspective to address intrinsic characteristics of the imagery such as its typical and viewer-implied hierarchical and frontal composition, explicit materiality, and its relationship to the symbolism and function of the church space as a whole, could have contributed to further illuminate the apse as the site for a special kind of imagery that is neither a narrative nor an icon.

It must be said that the book contains a surprising number of editorial shortcomings. Citations in Greek and Latin are only occasionally translated, and some footnotes have even been left in the author's native German (!). The frequent redundancy of information in the text and footnotes reveals the individual chapters as separate research contributions that have not been reworked to create a coherent, more reader-friendly book. Moreover, grammatical and orthographical errors interspersed with convoluted sentences occasionally disturb the reading process and interfere with the meaning of the text. All of this, unfortunately, compromises the apparent aim of reaching a broader audience of Anglo-American readers by publishing in English.

Whether or not one agrees with all of the many arguments presented in this ambitiously scoped and densely written book, Beat Brenk should be complimented for offering a wide range of new and intriguing ideas on an impressive amount of visual material that was produced during centuries crucial to the shaping of a Christian art.