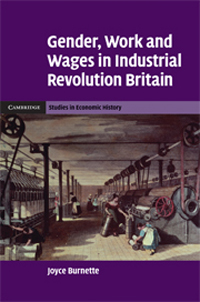 This book is the eagerly-awaited result of a long research project. It fills a considerable gap in the historiography of the British Industrial Revolution by providing a comprehensive survey of women's work and wages across the economy over the Industrial Revolution period. The first two main chapters provide a valuable synthesis of the available evidence on women's work and wages. The analysis of well-known sources such as the 1841 and 1851 censuses is combined with more micro-level data from commercial directories, and individual farm and factory accounts. Some of this is existing work by other scholars, but much is Burnette's own. She seeks to refine the findings of others on a number of occasions. In Chapter 2, for example, she suggests ways in which the gender gap may have been measured wrongly, making it larger than it actually was.

More than that, however, Burnette also attempts to explain, through the application of economic theory, why women tended to be concentrated in certain occupations rather than others and, more importantly, why there was a gender gap in wages. The main argument, flying in the face of many feminist arguments, is that occupational sorting and the gender gap were largely the result of economics, rather than gender ideology. Although contemporary views about masculinity and femininity might be cited to justify keeping women out of certain occupations or paying them less, Burnette believes such views were rarely the cause of gender differences in work and wages. Rather, she argues that, where the market was competitive, occupational sorting and the gender gap in wages were the result of biology. Women were paid less on average than men because they were less productive, both from a relative lack of strength and because they could work fewer hours. More controversially, however, Burnette argues that occupational sorting did not cause the wage gap, but rather minimised it. The premium paid for strength in many occupations meant that men were allocated to higher waged jobs requiring strength, while women were allocated to occupations where lower productivity mattered less, not just in terms of strength but also, in the case of cottage industry, where the penalty for child-rearing was less. Burnette uses economic models to demonstrate that the gender gap in wages would have been still larger had such sorting not occurred. Where the market was less competitive, occupational sorting could be the result of barriers erected to keep women out. Burnette discusses a range of such barriers in Chapters 5 and 6, but gives most importance to unions in skilled occupations. By contrast, in Chapter 4, Burnette tests for occupational barriers in agriculture and concludes that they did not exist. Instead, men and women were substituted for each other in response to changing market signals.

The logic of the argument as Burnette sets it out is irrefutable. However, some of the underlying assumptions could be challenged or, at least, raise other questions. The importance of strength may be overstated and certainly it is not clear that the wage gap was necessarily smaller when strength did not matter. More importantly, why did only strength command a premium in the form of higher wages? Burnette concedes that many occupations did require dexterity, which women were just as likely as men to possess, yet does not question why that went unrewarded.

Similarly, Burnette takes contemporary definitions of skill at face value. In her classification scheme, agriculture and textiles are unskilled and occupational sorting thus entirely due to strength. However, it is questionable if other occupations were genuinely more skilled or if it was gender ideology, rather than women's lack of opportunities to acquire such skills, that allowed barriers to be erected. Again, the extent to which differences in productivity could be affected by differences in hours worked by both genders has perhaps been taken too much for granted by historians: there is evidence that at times women worked considerable hours to the detriment of childcare. Nor should the possibility of customary wages be dismissed. Burnette's main argument against wages being fixed by custom is that women's wages in agriculture did change over time. A better test, however, might be whether they changed as rapidly as men's wages.

Above all, however, I found that the overall weight of her findings suggests a slightly different emphasis than that of her introductory and concluding remarks, in that the evidence for occupational barriers presented in Chapters 5 and 6 reinforces just how effective barriers could be. The areas where market competition was the main determinant of occupational sorting and the wage gap would seem to be the exception, rather than the rule.

In terms of structure, the book is somewhat repetitive: many arguments are made more than once, quotations appear verbatim in different places. For example, two quotations (179-80) are reproduced again on (313). Closer cross-referencing would have avoided labouring the point. However, the book is a model of clarity in terms of structure and prose. Economic theories and statistical tests are explained with equal lucidity. While it is much more than a textbook, Burnette's work will be of use to undergraduates as well to established scholars.

Most importantly, the objections to content and style should not detract from the importance of this study. Burnette has forced a re-evaluation of the different forces conditioning female labour force participation. Subsequent scholars of women's work and wages will have to engage with her arguments. In particular, it will be of interest to see how far this is a British story. Burnette has little space available for comparisons, but she does reflect on Sheilagh Ogilvie's recent work on early modern Germany, where occupational barriers, particularly guilds, often forced occupational sorting in ways that did not lead to the most efficient outcomes. [1] An important question will be whether the British economy was relatively more open than elsewhere in Europe and what bearing, if any, that had on Britain's status as the first industrial nation.