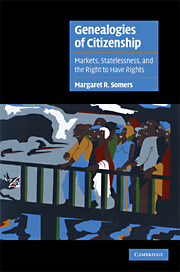 Most industrialized countries now seek to select would-be citizens according to how well they will do in domestic labour markets. Before they can receive residence permits, immigrants have to prove that they possess skills which are in demand. For residence permits to be renewed, they have to document that they are able to market these skills effectively in practice, allowing them to pay taxes and to remain independent of public assistance for the foreseeable future. In order to become citizens, long-term residents have to document that they behaved in personally and politically acceptable ways, and to prove that they are aware of the structure of the political system as well as of various details of local folklore by taking citizenship tests.

When the introduction of such tests was recently debated in Germany and the United Kingdom, critics mused how many citizens by birth would pass, and whether a failure rate assumed to be high or at least significant delegitimized setting different standards for those lucky enough to be born in the country or as descendants of citizens and others. In spite of the conspicuous presence of emigration series, which show families in troubled personal and economic circumstances making good abroad (and thus cutting domestic unemployment), at least on German private television, it was obvious that the question was in a way nonsensical. Citizenship by birth grants rights unconditionally - otherwise, there would be a continuous risk that it could be revoked, rendering people stateless and depriving them of most basic rights. The distinction is that discretionary citizenship by naturalization involves a change of citizenship, not its conferment. Thus, not meeting conditions set by citizenship tests does not lead to expatriation. Or does it? Margaret R. Somers's recent book argues that a process of internal statelessness is underway in many industrialised countries, with her primary focus on the United States.

For this account, hurricane Katrina is an emblematic event. In Somers's reading, the failure of all levels of government in the United States to provide for the men, women and children left in New Orleans in the wake of hurricane Katrina made visible that those left behind on and by the labour market had become expendable individuals who have lost the rights usually associated with citizenship. While many of those trapped in New Orleans were United States citizens, this citizenship had no concrete meaning for individuals deprived of health and success indicated by car ownership or access to other means of leaving the cities - a criterion for membership which is moving out of reach for an ever greater proportion of American society given the decline in stable, well-paying jobs and the reduced impact of educational or other achievements on earning power. The exclusion of the poor and vulnerable from the citizenry was highlighted, Somers argues, when those left behind during Katrina were labelled as "refugees" - a designation immediately rejected by the victims, who insisted on their rights as "citizens".

Somers argues that the actions of government agencies were not a result of personal incompetence, planning failures, resistance to adequate taxation, the legacy of slavery or institutional racism. They were not failures, but the logical and therefore approved consequence of "market fundamentalism" which has displaced rights. Market fundamentalism, in Somers's view the dominant discourse of the 1990s and the early twenty-first century, has replaced citizenship as "the right to have rights" with contractual relationships based not on rights, but interests. As Katrina documented, a social contract based on interests does not necessarily include all citizens, merely those who have something to offer to the state.

Somers's book is a wide-ranging enquiry into the origins of "market fundamentalism" and its meanings for the rights of residents in a state. It is organised in part around (re-)readings of Arendt, T. H. Marshall, and Polanyi. One line of argument leads Somers to juxtapose the internal "statelessness" imposed by market fundamentalism with the denationalization on racist grounds experienced by Arendt, contrasting the limited reach of human rights with the powers of exclusion available to states.

Somers places her observations in the larger context of a reconstruction of two traditions of thinking about residents in a polity: about rights theoretically extended to humanity (as exemplified by the French Declaration of the Rights of Man and of the Citizen), and about citizenship which tends to be restricted to a more exclusive group of full (and, until relatively recently, exclusively male and white) members of a polity. Somers places some of the trendy catchwords of social analysis, particularly "social capital", squarely in the camp of market fundamentalism willing to countenance internal statelessness by expanding the sphere of market-based exchange relations ("capital") to areas human interaction where it serves no useful purpose and legitimating the basic paradigms of economic analysis by introducing a variable which can adjust economic models to observable reality (the title of the chapter is "Let them eat social capital"). Somers applies a similarly devastating analysis to "civil society".

Genealogies of Citizenship is a book whose tone shifts between a (relatively broadly conceived) empirical analysis, a complex and subtle intellectual history of thinking about the relationship between individuals, markets, polities and society from Hobbes to the present which this review cannot do justice to, and normative arguments. I suspect that objections could (and will be) raised at all three levels. The argument linking Katrina to market fundamentalism and thus interpreting it not as a failure but as a success of government could have been set out more fully - particularly as Somers admits that the legacy of slavery, personal incompetence, racism and political structures did play a substantial role as events unfolded. Moreover, it would have been nice to know how widespread the language of market fundamentalism which delegitimized the claims of Katrina's victims actually was, given that the official response seems to have widely been seen as a failure, not a success. I would place T. H. Marshall's argument on citizenship (the renaissance of his 1949 lectures in recent scholarly discourse is a starting point for Somers's intellectual history of citizenship concepts) in a different framework and consider it more concerned with market relations than Somers appears to do. One of the guiding questions in his "citizenship" lecture [1], incidentally dedicated to the memory of a free-market economist, was, after all, how extensive rights-based citizenship could be combined with (labour-)market efficiency. Finally, Somers's analysis does not extend very much to the driving forces behind the emasculation of citizenship rights - one possible avenue for analysis would be to enquire how and why "states" as organisations and members of governing elites as individuals have come to assume that the state can keep order, wage wars, collect taxes, support the creation of wealth and the pursuit of power without a strong and inclusive vision of citizenship rights.

These quibbles are, however, clearly not the point. Somers has provided us with a broad, multi-faceted and immensely inspiring provocative account of modern "western" societies' problems in combining citizenship rights and market principles which should be required reading not just for those of us interested in such questions, but for anyone who intends to use the words "social capital" or "civil society" in future.