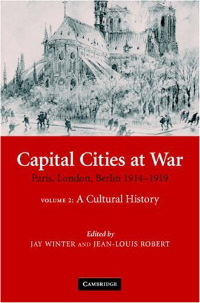 The first volume of Capital Cities at War appeared in 1997. It was in many ways a stunning achievement. In remarkably seamless fashion, it presented the results of a collective project, whose goal was to answer a common set of analytical questions about the history of Paris, London, and Berlin during the First World War. It thus represented a fundamental departure from the national history of this great conflict, as it insisted that comparative analysis of urban experience in wartime was not only possible but essential. This volume emphasized the material dimensions of the experience, the comprehensive, multifaceted demographic and economic dislocations of war on the home front, as well as the resultant challenges to social policy in the three capital cities. Criticism of the effort dwelled on the absence of a robust conceptual framework to contain the mass of empirical data, so that comparative generalizations were difficult to draw. The editors could plead, however, that this was the first of two projected comparative studies and that the second volume would address more general questions in analysing the cultural dimensions of the war in the three capital cities.

The long-awaited second volume has now been published. It, too, is in many respects a stunning achievement. The same virtues make it a model of collaborative research and writing. Though written by a single author, each chapter represents the product of collective labors that have been skillfully woven together and organized in an ingenious way. The chapters are devoted to what the editors call "sites of cultural expression." These include railway stations, exhibitions, entertainments, public spaces, religious sites, schools, hospitals, and cemeteries. Using these sites as orientation, the authors locate a breathtaking array of cultural practices, many of which have never been treated at all, much less comparatively. Jay Winter's essay on hospitals, for example, treats the taxonomic enthusiasm that governed these sites of healing, classified the diagnoses and treatments of the sick and wounded, and prescribed the uniforms that announced these classifications to the still-healthy. A fine chapter on universities in the three cities surveys the wrenching adaptations that the faculties and remaining students underwent, the growing role of women in these institutions of higher learning, and the impact of war on the curricula. Adrian Gregory's chapter on railway stations presents a riveting account of the joys and pains that were played out at these places, as trains first deposited grateful soldiers in the city on furlough, then hurried anxious soldiers back to battle.

Like its predecessor, this volume thus offers a wealth of information about attempts in London, Paris, and Berlin to make sense of the ordeal. It also displays some of the same problems. These are now, if anything, compounded in the greater intractability of this volume's subject-matter to the comparative project. The conceptual framework is again weak. Despite a bow to Michel de Certeau in the introduction, the editors have presented their collaborators with no coherent working-definition of "culture," so the levels of analysis - the order of questions posed - vary significantly from one chapter to another. Like the chapters that are devoted to schools and churches, many do not venture much beyond the history of cultural institutions. Moreover, the absence of a common definition of culture makes it difficult to situate the first-person testimonies that feature prominently in many of the chapters. The chapter on "the home and family life" presents gripping excerpts from the correspondence of a Parisian family as it mobilized its connections in an attempt to ascertain the fate of its youngest son. The author of this chapter insists that this "one Parisian family can stand for many others" (348), but makes no effort to establish the grounds for this claim. The family in question was in fact hardly a typical case. It had a lot of connections; and the missing son was a lawyer, the product of a university education in oriental languages and political science.

The issue of analytical congruity also shadows this volume more than it did the first, which focused on material changes and succeeded - in often imaginative ways - in arraying data along common axes of comparison. Culture is evidently more resistant to this project. The shifting geographical emphases in the chapters - the fact that London and Paris are more extensively treated than Berlin - is thus due in part to the lack of comparable kinds of evidence. But the problem lies deeper. It surfaces in the fact that no war memorials were built to the inhabitants of any of the three cities. As the editors confess in the end, these metropolises did not themselves figure "in the system of representations of the war in these capital cities" (470). Quite apart from the questions it raises about the place of urban culture in this "system of representations," privileging the capital cities in a cultural comparison risks slighting other, more basic subidenties - the often divisive cultural practices that operated within each of these cities, such as those of class, gender, or confession. The chapter on "the street," which focuses on Paris and is most directly indebted to Certeau, has little to offer about the deep divisions of social experience that were marked out in neighborhoods. A question mark must therefore hang over the editors' conclusion, in which they write of the residents of all three capital cities and assert that "there is evidence of a common experience joining together these city-dwellers in their streets, their theaters, their homes" (480).

A project of such grand scope and daring offers a wide target for criticism. It bears emphasis that together the two volumes represent an extraordinary achievement, which define a research agenda that historians of this and other wars will have to confront.