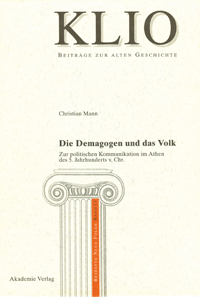 By "demagogues" Mann means political leaders in general, not only those of a populist kind, and his book is a revisionist study of political leaders and their relations with the citizen body in fifth-century Athens. His main contention (26-8) is that M. I. Finley was right to see the people in assembly as ruling, and the demagogues as structurally necessary to the successful working of the assembly, [1] and that W. R. Connor has led scholarship in the wrong direction by accepting the judgments of Thucydides (2.65) and the Athenaion Politeia (28), and postulating the rise of a new kind of politician in the 420's after the death of Pericles. [2]

After the introduction (section I), Mann argues in section II that there was no change in the political culture of Athens between the Persian Wars and the 420's. The reforms of Ephialtes did not end a period of aristocratic domination, as alleged in Athenaion Politeia 23.1-2, 25.1. Men attracted votes in ostracisms because of an ostentatious life-style, rather than their policies or a preference for some other man as leader. Despite the views of Thucydides, the death of Pericles did not mark the end of an era: the Archidamian War was prosecuted on Pericles' lines, and successfully; the plague did not lead to a breakdown. Pericles was attacked by comedians in his time as Cleon was in his.

In section III Mann argues that, while leaders inevitably had friends, from the time of Cleisthenes (Herodotus 5.66) they showed their loyalty to the people as taking precedence over private attachments. Both before and after 430 some politicians, of varying political inclinations, belonged to aristocratic families and some did not; some, such as Themistocles and Cleon, posed as common men, while others, such as Pericles or Nicias, asserted their superiority. Wealth was necessary to provide the leisure for full-time political activity; but fifth-century leaders did not have ostentatious life-styles, and greater wealth and use of it did not guarantee greater popularity or political success.

Economic developments in the fifth century and through the Athenian empire provided new opportunities for ambitious men, but ostentatious success elicited envy rather than popularity. Leaders had to accommodate themselves to the people (Mann thus arrives by a different route at a position similar to that of J. Ober [3]); the aristocrats were democratised while the imperial city was aristocratised.

Mann believes that there was a change after c. 420: before then the democracy was criticised but not seriously opposed, but afterwards it was opposed and in 411 overthrown. In section IV he asks how that occurred. For him the real new politician was Alcibiades. The idea of conquest in Sicily was not new, and Alcibiades while in Athens did not want to change the constitution, but he projected a new kind of image. Advertising his aristocratic background, relying on foreign friends, adopting a lavish and transgressive life-style, he claimed a superior status as archaic aristocrats and tyrants had done but fifth-century leaders had not.

Athens' last ostracism should be seen not as an attempt to resolve the clash between Alcibiades and Nicias but as an attack on Alcibiades for his prominence - which failed because when Alcibiades was in Athens he could exercise his charm. He was forced into exile when the legal proceedings resulting from the religious scandals of 415 reached their climax while he was not in Athens. The mutilation of the herms was not an attack on the democracy, but as an act by a hetaireia it saw the beginning of the hetaireiai's development into bodies which could work against the democracy.

The failure of the Sicilian expedition was not the fault of the democracy, but it served to discredit the democracy. The institution of the probouloi in 413 reflected that, but was not itself a move against the democracy. The revolution of 411 succeeded because of the absence of many poorer citizens with the navy, and the existence of an organised body of men opposed to the democracy who resorted to intimidation and murder. Once the oligarchs split, the democrats were able to reassert themselves; but the fact that the democracy had been overthrown proved that it could be overthrown, and the restored democracy of 410 was more fragile.

In conclusion (section V) Mann stresses that what distinguishes the decade of the 420's from the pentekontaetia is not that its political culture was different but that it is better documented; anecdotes showing what was thought credible about the pentekontaetia suggest that the political culture was broadly similar then. The "Old Oligarch" (ps.-Xenophon - dated both by Mann [39-41] and by me to the 420-s) was right to maintain that Athens was ruled by the people. And Athens' failure in the Peloponnesian War was not due to an excess of democracy: Athens was successful when the democracy was stable and unchallenged, and the failure came when the democracy was attacked.

As Mann himself acknowledges, it is difficult to compare the poorly-documented pentekontaetia with the much-better-documented 420's. I agree with him that the reforms of Ephialtes were the last stage in a long development (but still, I think, an important stage), not a reaction against a period of aristocratic domination, that Thucydides was indulging in wishful thinking when he contrasted the benign leadership of Pericles with the damaging rivalry among Pericles' successors, and that Alcibiades was a politician of a strikingly unusual kind. But in some respects I think Mann's picture is as over-simplified as the one which he attacks. The few voters who wrote on their ostraka a characterisation of their chosen victim may not be typical of the many who did not. It is not clear that politicians such as Themistocles and Ephialtes were as remote from the old ruling families as were Cleon and Nicias, and it does seem to be true that from the 420's onwards political leaders who were from those families, whether supporters or opponents of the democracy, were rarer than earlier. The development of separate military and political careers which began in the 420's and continued into the fourth century changed the nature of leadership in Athens. Pressure takes time to build up, and I think what burst out as a result of Alcibiades' conduct and the failure of the ambitions for Sicily may well have started brewing in the 420's.

But this book is the result of thorough and thoughtful work. It poses a salutary challenge to familiar generalisations, and it deserves to be read by all who are concerned with fifth-century Athens, as a counterpart of Connor's book if not as a replacement for it.