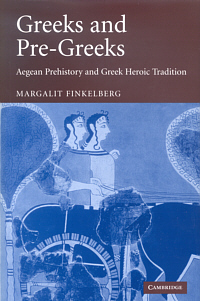 The Mycenaean civilization of the Late Bronze Age represents the first Hochkultur in the Aegean for which we have historical documentation. At the same time, it is sometimes regarded as a Heroic Age - a dim era, glimpses of which can be found in later Greek myth. This makes the second millennium a sort of dark age, in which the foundations of Classical Greek civilization were laid but that above all is a period that accommodates various peculiarities of Greek mythology, such as matriarchy, human sacrifice, and dynastic rule by eastern kings and princesses. According to this view, the second millennium is both the founding era and the antithesis of the Classical period.

Margalit Finkelberg's book stands in the latter tradition. Starting from the position that the oral heroic tradition preserves a memory of momentous historic events, her aim is to show that "historical myth" - as she labels it - can be utilized as a source for studying the pre-Hellenic or Aegean substratum of the Bronze Age. She considers this substratum to be represented in such local dynasties as the Inachids or Pelopids, which have a place in the Hellenic genealogy but are not descendants of Hellen. In linguistic terms, they were speakers of languages to which the pre-Greek suffixes -ss- and -nth-/-nd- belonged. The spread of these suffixes over western Asia, Greece and Crete suggests that this pre-Greek language was part of a wider group of Anatolian languages that Finkelberg feels safe to identify as Indo-European - more specifically Luwian, which in her view is also the language of Linear A. In this manner the pre-Hellenic civilization maintained ethnic, linguistic and cultural interconnections with the civilizations of western Asia Minor and even the eastern Mediterranean, "for the simple reason that the Anatolians of Asia [...] cannot be taken separately from the great civilizations of the Near East" (6).

Matrifocality is another aspect of affiliation with western Asiatic, Indo-European culture. Finkelberg detects a pattern in a number of myths in which the royal throne passes not from father to son but from father to son-in-law (see e.g. Pelops). Kingship by marriage means that dynastic succession took place through the female line, as it is the queen who is succeeded by her daughter. Finkelberg also finds evidence of this in the Old Hittite period. At the same time, there are traces in Greek myth of a system of patrilinear descent. Finkelberg seeks the explanation for this in a practice of rotational succession between two or three patrilinear clans of neighbouring kingdoms that had alternating access to the throne through marriage to a local line of queens. The queen presumably was the priestess of the mother goddess of the land. The exogamous marriages of the exiled hero-becoming-king that we witness in myth probably testify to the cultural assimilation of outsiders into the domestic group, with women playing a crucial role as the consolidators of traditions and the indigenous identity. The author concludes that in the course of the second millennium, ethnic and cultural fusion took place between the pre-Greek population and Greek-speaking groups that were infiltrating from the north, resulting in a population of mixed descent ruled by a multi-ethnic aristocracy.

Finkelberg turns to dialect geography to show that there was indeed no break in linguistic or cultural continuity. Re-examining linguistic interrelations between the historical Greek dialects, she argues that until the collapse of the Mycenaean palace civilization there had been a dialect continuum in most of the Greek territory which must have developed without disruption, probably since the arrival of Greek-speaking tribes at the end of the third millennium. Mapping the respective positions of dialects within the dialect continuum, she suggests a revised scheme for the original geography of Greek settlement. In Finkelberg's reconstruction, during the Bronze Age Cretan and Pamphylian, for instance, were spoken in Magnesia and south-east Thessaly.

The real break coincides with the collapse of Mycenaean palatial society. In the Catalogue of Women, the Race of Heroes is destroyed by Zeus, who wants to put an end to unions between gods and mortals. According to Finkelberg, this is a reflection of the abolition of the Bronze Age practice of female exogamy and the institution of kingship by marriage. Patrilinear succession became the norm, due to the influx of fresh, Greek-speaking nomadic groups (e.g. the Dorians) and the rise of the city-state. With this the role of the queen-priestess was eroded and Bronze Age fertility goddesses such as Hera had to yield their prominent position in the pantheon to Zeus. Pre-Greek elements are hardly visible in the Homeric epics. Finkelberg suggests that they were deliberately suppressed in order to create a foundation myth that would enhance the consolidation of Bronze Age 'indigenes' and Iron Age newcomers under the collective name of Hellenes, and a common identity based on the idea of a shared past.

Together, the basic ideas of Finkelberg's argument make it clear that this book contains a strong plea to return to a number of traditional standpoints. It departs from the view that the ancient Greeks' Age of Heroes equals our Bronze Age, and that careful analysis of later myths can reveal facts about this historical period. It is an era determined by migrations of culturally and ethnically homogeneous population groups (107, 144); language is considered to overlap with ethnicity, and is thus an index of migrations and tribal relations (109). Where there is doubt, archaeology can help to evaluate the reliability of the tradition. Certainly, the argument is presented with vigour and contains much food for thought. For instance, the idea of matrilinear succession explains remarkably well the constitutional crisis in Ithaca at the beginning of the Odyssey (69-71). On the other hand, archaeologists may be a little uneasy to find themselves projected back into the 1950s with references to V. Desborough's identifying the coming of the Dorians in the archaeological record (145), or LH IIIC pottery being linked to Hesiod's end of the Race of Heroes (150), nostos stories, and large-scale migrations of Achaeans to the eastern Mediterranean (152-3).

Whether or not one is convinced by this book's general thesis is to a large extent dependent on whether one accepts the author's use of myth as a historical source (9-11, for methodological discussion). For Finkelberg, myths have not only a kernel of historical truth, but also a direct relationship with specific historical events (167-8), and the author is prepared to take the information quite literally, for example in the case of colonial foundation stories (102-6, 152) or traditions about the coming of the Dorians (145-8). However, even if one accepts that myths are history, not literature, and that the stuff of which they are made are facts, not fiction, one may wonder why Greek myth "invariably lead us to the Mycenaean civilisation" (11-2), and not to, for example, the Middle Bronze Age or Early Iron Age. Also, if one accepts that myth contains "a residue of its past meaning" (11), one has to face the probability that this information has reached us through a series of filters of successive generations; a great problem is that we are not in a position to know what 'historical' information has been discarded along the way. More sceptical scholars would point out that mythical stories show alternative mythical variants and were constantly being revised. This certainly also relates to local and pan-Hellenic genealogies that until the mid sixth century were still highly dynamic. Another problem is that traditions were frequently invented, especially in the context of ethnogenesis - a mechanism that H.-J. Gehrke has called geglaubte or intentionale Geschichte. Finkelberg reckons with the possibility that the past was updated in order to shape a collective memory (170-6), but the implicit assumption seems to be that this created an anachronistic veneer under which a genuine Bronze Age tradition can be discovered. In itself this may be possible, but given the reputation of myth, this should be tested, using all possible external evidence. For instance, Linear B documents or important funerary complexes such as the Mycenaean shaft graves can provide interesting test cases for theories about matrilinear succession and the hereditary social position of women in their role as queen-priestess.