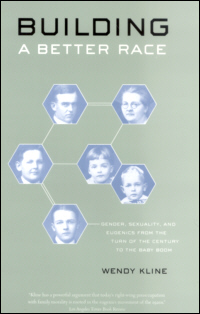 The history of eugenics has moved from the margins to mainstream history. Scholarship remains very uneven, and despite several excellent studies on American eugenics, a definitive account of American eugenics has still to be produced. The succinct study by Wendy Kline is significant and innovative, as written from a family welfare and gender history perspective. Her work wrests the topic away from historians of genetics, and sees reproductive issues as central.

Kline's focus is on Californian eugenicists: the Stanford psychologist Lewis Terman, the pioneer marriage counsellor Robert Dickenson, and health educator Paul Popenoe. Terman tackled sexual maladjustment, and the scale of differences between male and female. Rather than seeking an explanation for the vigour of Californian eugenics (for California was not the only emerging state to espouse eugenic policies), Kline uses these individuals to illustrate a key shift towards family oriented eugenics. Given that the high numbers sterilised just before the New Deal, it raises a further general issue of why the United States was especially interventive in reproductive surgery. Written from a feminist perspective, we have far more on restricting motherhood - and then on the redefinition of the maternal role - than fatherhood.

Kline sees historical work on eugenics outside Britain, France and Germany, as somehow more innovative. I find this puzzling, as research on these core locations had a strong reproductive focus, and has been pursued with a critical edge since the 1980s. There are strong affinities between Kline's concern with family stability, and work on the post-WW2 family politics of German conservatives. Although the issue of the responses to Nazi eugenics is touched on, the reader will not find the secondary literature cited especially helpful, and while one can readily agree on the authors' views that there were continuities, the involved responses are scarcely delineated. Again, this is a topic ripe for reappraisal.

Kline sees a shift from preventing procreation of the unfit to promoting procreation of the fit. We are offered a refreshingly broad view of eugenics taking on board values associated with reproduction, maternity and family values. Yet negative eugenics found new forms, and attention shifted to "the population explosion" in developing countries (especially those seen as vulnerable to communism).

What we have is a thoughtful and insightful re-reading of eugenics on the basis of a series of Californian case studies. How this stands up for the rest of the USA, and other national contexts will be interesting.