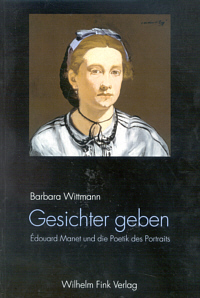 To give a gift is to expect a gift in return. Adapting a biblical proverb: "Give and ye shall receive." Gift giving is never neutral, but part of a social process that entails an obligation on the part of the person who receives. The greater the gift, the greater the expectation on the part of the person who gives. The implications of this process of circulation in the context of the painted portrait are the subject of Barbara Wittmann's recent publication, Gesichter geben: Édouard Manet und die Poetik des Portraits.

As is well known, the invention of photography just before the middle of the nineteenth century gave rise to a crisis in painting, not least in portraiture. The simultaneous transformation of Paris from medieval city to modern metropolis, with all its accompanying social upheavals, challenged traditional notions of the individual and his or her place in society. The long-held belief in the congruity between the human interior and exterior became untenable, and with it the physiognomic assumptions that had prevailed in portraiture up to an including the work of Ingres. What could the portrait be in this brave new world of uncertainties? What sort of context and meaning might it have? These were the questions that faced the first generation of avant-garde painters who remained interested in the genre, among them Édouard Manet.

According to Wittmann, in his portraits - painted not on commission but as gifts for the people portrayed - Manet sought to develop a strategy for dealing with precisely these problems. Seeking to create new contexts for his work, Manet modified the conventions of portraiture in a variety of ways, finally dissolving them altogether into an art that seems to be about nothing but paint and painting. In the art-historical "master narrative," of course, such self-reflexivity and medium specificity is seen as the defining characteristic of modernism, whose father will always and forever be Manet. If there is one major objection to the book, then, it is its too easy acceptance of the "story of modern art" according to Barr and Greenberg. Fortunately, however, the sophistication of Wittmann's methods make it plain that she is no mere formalist seeking to reinstate a traditional view of the origins and import of modern art. Her argument clearly makes Manet the crucible of modern painting, but she also reveals that there is something deeply personal and occasionally even ironic at stake in his portraiture, and this makes her examination more than just another reiteration of a well-known genealogy. This is where the title of the book comes into play: to "give [someone] a face" here means not only to reproduce certain physical characteristics with paint on canvas - and to make the viewer aware of the process - but also to submit both the portrait itself and the person portrayed to the logic of the potlatch, creating a non-economic system of reciprocal exchange which Wittman demonstrates was extremely important to Manet, both as a man and as an artist.

The book is divided into eight chapters, each dealing with a different portrait or portrait series. Some of the problems facing the art of portraiture after mid-century are discussed in chapter 1, establishing a frame of reference for Manet's search for a way of dealing with them. Already at an early stage, the artist seems to have been aware of the physiognomic fallacy and the impossibility of creating a visual coincidence between the individual and his or her social role. At the same time, however, he had not yet found a painterly means of leaving convention behind, and it is precisely this combination of consciousness and inexperience that accounts for the rather wooden and "absent" quality of a work like Auguste and Eugénie-Désirée Manet (1860).

It was not long, however, before Manet had begun to find his own manner of expressing in paint his uncertainty about the status and goal of portraiture and simultaneously binding his sitter into his own particular modus of reciprocity. This is most clearly demonstrated in his portraits of his literary friends Émile Zola, Zacharie Astruc and Stéphane Mallarmé. The analysis of Manet's extraordinary portrait of Zola in particular adds a new dimension to one of the most written-about likenesses in the history of art (chapter 3). As Wittmann shows, what appears at first to be a homage to the then already-famous author of Thérèse Raquin and Manet's first champion reveals itself on closer examination to be a fundamental, almost satirical critique of one of Zola's most basic tenets, his theory of temperament. The three-dimensional and living Émile Zola - that is, the man who is supposed to be "revealed" through the portrait - is flattened into paint, overridden by art-historical accessories that point not to the sitter, but to the artist. While seeming to be mere documents of Zola's art-critical activity - as would be appropriate in a portrait - the surrounding objects in fact serve to reify the work's putative subject, reducing him to a mere spokesman for the painter. According to Wittmann, the very diversity of these reproductions and objets d'art - their many pairs of eyes, the palimpsest of quotations - are a challenge to Zola's notion of the modern work of art as "a corner of nature seen through a temperament," referencing instead a very different concept of modernity, namely Baudelaire's contingent. The nature of the Zola portrait gift is thus double-edged: on the one hand it is a sign of reverence, a token of gratitude for the critic's work on Manet's behalf; on the other it is a subtle but not unimportant critique which nonetheless places the recipient in the artist's debt.

The portrait of Mallarmé, a close friend of Manet's, is entirely different (chapter 7). Wittman sees this work as an exchange between equals, untouched by the somewhat mocking tone that characterizes the portrait of Zola. Here Manet seeks not to critique his sitter, but rather to create a painterly equivalent to the latter's poetics, in fact to the very process of Mallarmé's poetry-making. As a poem emerges from a passive and almost dream-like state, so the likeness emerges from Manet's brushwork. Both the ephemeral smoke of the cigar and its metamorphoses into trailing strokes and blobs of paint signify a new "production aesthetic" shared by poet and painter alike. The "romping," mobile quality of Mallarmé's use of words finds its correspondence in Manet's playful and open style. The artist here invents a new mode for the portraiture of a new age: no longer are physical appearance and accessories to reveal the character and social role of the sitter, but rather the exact alikeness of paint and personage.

The series of portraits of Berthe Morisot and in particular Manet's magnificent Bouquet of violets and fan - all painted in 1872 - have a similar import (chapter 6). Here, Wittmann asserts, the artist sought to capture and recreate in paint something even more ephemeral than the invisible process of creativity: the eternal flirt between the painter and his model. The variety and agility of the brushwork parallel the various facets of Morisot's personality and appearance, which are as changeable as the metropolitan world in which she operates, as well as the modalities of the flirt itself. Wittmann sees the authenticity and directness of Manet's style as an effort to capture the sitter as she lives and breathes, its liveliness promising to preserve or even eventually to resurrect her memory. Simultaneously, however, the artist appears to be aware of the impossibility of his endeavour: what Wittmann calls "phenomena of belatedness" (p. 249) give lie to the hoped-for link between art and life, the immediacy that the picture seems to promise. With the gift of this series, especially with Bouquet of violets and fan (where the painter returns - as art - an object that in fact belongs to his sitter anyway), Manet once again seeks to create a situation of indebtedness: these sublimated declarations of love expect - even demand - love in return. One is tempted to say that the artist's awareness of the impossibility of such reciprocation, coupled with his consciousness of the inability of paint to do anything but represent itself - that is: its inability to save the loved one from death - in some sense accounts for the obsessive quality and indeed melancholy of this particular group of works.

This thoughtful and well-researched book provides an interesting addition to the already abundant Manet literature. Its innovative methodology might provide a model for future investigations into late nineteenth-century portraiture, a genre that continued to be practiced by avant-garde artists, often as a form of exchange among themselves. Portraits of friends and supporters were not only a means of creating or cementing a group identity, but also of making theoretical statements about the nature of their art. Much as they seem to have been for Manet.