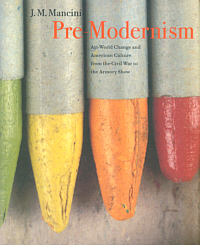 The history of artistic modernism in the United States once was a fairly linear story that went something like this: modernism began with the exhibition of Duchamp's Nude Descending a Staircase at the 1913 Armory Show, the small circles of vanguard artists who exhibited at Alfred Stieglitz's 291 Gallery in New York, and the salon of Gertrude and Leo Stein in Paris; it began to flourish with the migration of European artists and teachers to the United States, e. g. Hofmann, Albers, and de Kooning; and it culminated with the movement of Abstract Expressionism and Minimalism. Although this master narrative has been thoroughly questioned and revised over the years, historians still discuss modernism and avant-garde in the United States as a radical break with the past, as a movement that opposed the capitalist regime of Gilded Age America and that created a more progressive and cosmopolitan culture. In this scenario, Stieglitz and other promoters of the aesthetic avant-garde worked hand in hand with other radicals in the political sphere to disrupt and transform American society in fundamental ways.

J. M. Mancini proposes an alternative historical account of modernism. Her argument shifts the focus from the aforementioned early twentieth-century agents of change to the more mundane world of institution building in the United States. While the Armory Show as well as Stieglitz's small gallery were important milestones in the emergence of a modernist culture in the United States, the break with nineteenth-century practices was less dramatic. Indeed, according to Mancini, the history of modernism in the United States is one of continuity rather than radical change. The evidence for this continuity lies in the history of art institution building itself. Modernist America did not violently erupt in 1913; rather, it grew out of a cultural history that Mancini traces back to the time just after the Civil War.

The sociological and historical inquiry into the emergence of cultural hierarchy in the United States is a relatively recent phenomenon. Mancini acknowledges two ground breaking studies in this field, Levine's "High Brow / Low Brow" and DiMaggio's essay "Cultural Entrepreneurship in Nineteenth-Century Boston" [1], which both developed a cultural history of the division between "high art" and "popular art" in nineteenth-century visual arts, theatre, and music. Mancini conceptually follows DiMaggio's study of large municipal museums in Boston, New York, and Philadelphia, and their function in establishing cultural hierarchy. Like DiMaggio, she postulates the importance of an "organizational field" that makes institutions meaningful for their constituents and society at large. According to DiMaggio, the organizational model for late nineteenth-century cultural institutions followed that of the corporate world. Mancini here parts ways with DiMaggio in that she sees the art world less vertically organized. The art world that the reader encounters in Pre-Modernism is not so much a top-down corporate model as a discursively contested, participatory public sphere.

Mancini's history of institution building thus shares more with Jürgen Habermas' concept of transformation of the public sphere than Di Maggio's approach which follows Pierre Bourdieu. Capitalism, according to Mancini, is an enabling force in the visual culture of the United States, providing individuals with the entrepreneurial resources to become art professionals. Echoing Habermas' discussion of art criticism in 18th century Europe, Mancini tells a compelling story of art critics in the United States and their struggle to establish themselves as a professional class.

A significant virtue of Mancini's study is that she shifts the focus away from the well-known events and figures in modernism toward a wider circle of cultural entrepreneurs in the American art world. The cast of characters includes, but is not limited to, Sylvester Rosa Koehler, collector, author, and curator; Louis Prang, promoter of chromolithography; Clarence Cook and Mariana Griswold Van Rensselear, art critics; and Charles Erskine Scott Wood, West Point graduate, artist, lawyer, and museum director. The cultural movers and shakers that figure in this study had different ideas about cultural hierarchy, but they all participated in the transformation of the art world into a sphere where professionals and their institutions control authority. For Mancini the history of professionalization in America laid the foundation for modernism.

What Mancini stresses throughout the book is that strategies of institution-building that worked for cultural entrepreneurs immediately following the Civil War were still valid in the formation of early twentieth-century modernist institutions. The author lists a number of cases where commercial interests did not prevent an individual or organization from promoting modern and vanguard art: Louis Prang, whose name is synonymous with chromolithographs after works by Albert Bierstadt, Thomas Moran, and many others, became involved in modernist ventures such as the publication of the journal Modern Art as well as an exhibition of works by Whistler, Cassatt, and Manet in Boston. Another early arts promoter was Joseph Moore Bowles, Prang's business partner in publishing Modern Art, who structured the magazine to fit the needs of a wide readership. Indeed, the journal blended a range of publications from "'genteel' general-interest magazines such as Harper's, Scribner's, and the Century" to "art journals like the Art Amateur" and "ten-cent mass-circulation magazines, like Cosmopolitan" (27). Mancini lists these and other cultural entrepreneurs not just to set the stage for modernism but as organically and historically connected to it.

Mancini makes a persuasive case that aesthetic modernism had much closer historical ties with the culture that produced "kitsch," the binary opposite of modernism according to Clement Greenberg. In the first three chapters of Pre-Modernism Mancini admirably weaves together these two trajectories that have come to define the dialectic of the modern art world. What the reader discovers is an art world that was very fluid in terms of cultural hierarchy and access to resources. The so-called temples of art, municipal museums built in the 1870s and onwards, had public education in their mission statements. Museums from Cincinnati and Milwaukee to Boston and New York had holdings of art, natural history, and science; they collected plaster casts, the arts of "design" and "manufacturing" next to engravings, sculpture, and painting; and they made classrooms available for drawing classes. Mancini's research reveals that the professional battle over control of this emerging organizational field turned critics into fierce opponents of institutional fraud. In a controversy surrounding the Metropolitan Museum of Art's collection of antiquities from Cyprus the critic Clarence Cook became the defender of a culture that prioritized professional integrity over amateurs and irreducibility of the object over the inauthentic. In Mancini's account it is largely the nineteenth-century critical profession that establishes the standards for authentic art in the United States.

Read against this emerging professional ethos of authenticity, the "crisis" triggered by the Armory Show appears in a new context. Mancini attributes the sense of crisis less to a radical break with the conservative art establishment than to existing tensions within the organizational field. The show forced critics to demarcate their position at a moment when standards of authenticity and irreducibility of the object were still in flux. One critical response was avoidance of evaluative criticism. That is, critics debated the institutional legitimacy of the Armory Show and its challenge to professional art discourse rather than the art works.

One answer to the critical confusion caused by the Armory Show was Alfred Stieglitz's "organizational modernism." Stieglitz promoted vanguard art and its critical approval system. He founded the Photo-Secession as a vehicle that moved photography from a very informal production system to a professional organization, and he gave it a critical voice, the publication Camera Work. Through carefully chosen criticism and editorials, Camera Work maintained quality control over who participated in the reorganization of photography into a modern art form. When Stieglitz opened his Little Galleries at 291 Fifth Avenue the publication of Camera Work had already laid the foundation for the gallery to become a "hermetically sealed" art world (163).

The final chapter and Postscript of Mancini's book are not as tightly argued as the rest. The controversy around Richard Serra's Tilted Arc (1981) of the 1980s was indeed one where public opinion was pitted against experts, where cultural authority was at stake, but the link with Mancini's focus on "pre-modernism" is tenuous. Mancini's attempt to compare Tilted Arc with a controversial public commission in Portland, Oregon, from 1888 - Olin Levi Warner's Skidmore Fountain - is equally forced. What the Postscript brings into relief, though, is the theme of loss and failure in Mancini's narrative. What Tilted Arc demonstrates in her account is that the rising authority of a professional class of art has led to the exclusion of a more participatory, lay-driven art world. Her recommendation to increase the level of funding for public art education is well-intended, but it also creates a false nostalgia for an art world of pre-modernist innocence.

Whatever one thinks of Mancini's conclusions, Pre-Modernism adds much needed research to historical analysis of the cultural forces that brought about modernism in the United States. It is a valuable contribution to the history of institution building in this country.