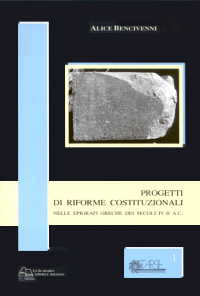 Historians of Greek and Roman antiquity have traditionally regarded the Hellenistic period as one in which the significance of the city-state in Greece and Asia Minor was eclipsed by the emergence of the territorial state under the leadership of the Successors of Alexander the Great. In collecting and assessing the significance of stone inscriptions displayed publicly in the city-states (or alternatively at an inter-state sanctuary) which record constitutional arrangements proposed for individual Greek cities by Hellenistic sovereigns (kings) and their intermediaries (generals and satraps), Bencivenni contributes to the contemporary reassessment of this long-held view.

This book brings together a set of material diverse in its provenance (from Cyrene in north Africa, to Tegea in the Peloponnese, to Tyriaion in central Phrygia) and chronological spread (from the 330s to 180s BC), and analyses them in the light of the fourth-century Aristotelian assessment of constitutional form. In her introduction Bencivenni stresses the sustained relevance to these Hellenistic arrangements of the polis as 'an association of citizens within the framework of a constitution' (Aristotle, Politics 1276b1-2) and the idea that the 'constitution is the organization of a polis with regard to its offices, especially that which is supreme in all matters' and that the 'government (politeuma) is everywhere sovereign in the state and is in fact the constitution (politeia)' (Aristotle, Politics, 1278b 9-12).

Aside from an introduction and conclusion, the book consists of eleven chapters, each of which examine closely a single stone inscription or dossier of inscriptions recording or purporting to record constitutional arrangements introduced for city-states by, or in agreement with, a higher authority. The collection does not provide new editions of the inscriptions: Bencivenni relies on previously published texts but comments closely on disputed passages. Nevertheless, the standard of epigraphical publication is high: Bencivenni describes the dimensions and material of the stone including details of the findspot and present location, and where relevant, museum inventory number. She provides a comprehensive list of editions (conventional and electronic) and studies of the stone (though there is no distinction drawn between those editions which were, or were not, based on autopsy of the stone). The text of the inscription is followed by an Italian translation, and there follows a commentary, including discussion of scholarly interpretation of the texts, the question of whether the constitutional arrangements were in fact enacted, close analysis and the drawing of parallels from this collection of the political and constitutional formulae and terminology that appear in the documents, where necessary, clarification of the order of enactment, and analysis of the relation between sovereign and polis.

With the exception of the now lost letters of Antigonus to Teos (no. 7), there are photographs of the stones or squeezes of the stones under discussion, some of which are distinct enough to make out individual letters.

Of the documents included in the collection, some are well known: no. 8, the Smyrna dossier published at the time of Seleucus II, has been known since the seventeenth century; others are less well known: no. 6, the treaty between Latmos and Pidasa carried out on the initiative of Asander, satrap of Caria (SEG xlvii 1563), is introduced to the wider audience for the first time (cf. 10 and 11).

Bencivenni's definition of constitutional arrangements is wide and the documents refer to diverse types of intervention: the return of exiles (1, 2, 3, 4, 5), the introduction or guarantee of demokratia (1, 2, 8, 9), an oligarchic constitution (5), the levying of forces on behalf of a sovereign (1), the treatment of traitors (1), arrangements for the punishment of tyrants (3), domestic arbitration (2, 4, 7, 10), cult activity (2, 6, 7, 8, 9, 10, 11), the return of sacred monies (4), leases of sacred property (9), assembly, bouleutic and judical procedure (3, 5, 9, 10), the use of foreign judges (4), qualifications for citizenship (5), the position of the sovereign (5), the appointment of lawmakers (1, 5, 7), physical and constitutional arrangements arising from sympoliteia (6, 7) and the award of shared citizen rights (8, 10), exemption from liturgies (7), the grain supply (7), freedom and/or autonomy (7, 8, 9), treaties with neighbouring communities (8), the foundation of new settlements (10), and the granting of a polis-constitution and institutions to a community (11). They pertain to arrangements proposed or proposed by a range of higher authorities: Alexander the Great (1, 2, possibly 3, 4), Ptolemy (5), Asander satrap of Caria (5), Antigonos Monophthalmos (6, 7), Seleucus II (8, 9), Arsinoe (10) and Eumenes II (11). The inscriptions and dossiers fall into three principal categories: decrees of the poleis which react to arrangements proposed by sovereigns (2, 3, 8), decisions of the sovereign, enunciated sometimes in the form of letters, which appear to override the laws and decrees of the polis concerned (1, 5, 6, 7, 11), others record combinations of the first two categories or represent the results of negotiation between the sovereign and assembly (4, 9, 10)

Bencivenni implies in her conclusion that this collection aims to provide the starting-point for new research into constitutional arrangements of the Hellenistic period. Meanwhile, she is able to conclude that these documents provide inimitable evidence for the political and diplomatic mechanisms which direct the formulation and execution of constitutional arrangements; they attest to the language used in the civic assemblies, the courts of the sovereigns, their representatives and the embassies between these parties; and allow us to assess the power-relations between the sovereigns, cities, and other subordinate groups. Bencivenni observes the apparent constant subordination of many aspects of civic organization to external authorities, an experience many of the cities would have encountered under the Athenian and Achaemenid empires. But this does not undermine Bencivenni's observation of the survival of polis-identity and pride in that identity and the sovereign's recognition of this as a force. However, three vital questions all too often remain unresolved: how certain can we be of the initiative for such constitutional arrangements? Were such arrangements in fact imposed, and how willing were the subordinate communities?

A comparable collection of Hellenistic documents is C. Bradford Welles' Royal Correspondence in the Hellenistic Period: A Study in Greek Epigraphy (Yale University Press, 1934). That publication stressed the role of letters in Royal diplomacy in the Hellenistic period, and provided a close study of the epigraphical technicalities of that genre. Bencivenni's collection, by contrast, is an important contribution to the contemporary tendency to look closely at the constitutional details of the Greek cities of the Hellenistic period and to reassess the relationship between the polis and the sovereigns of the territorial states. [1] For this reason, it will be important to all historians of the Hellenistic period and particularly those interested in the history of the polis during this period. Moreover, the form of this publication makes it a valuable and user-friendly repository of information and textual and close historical analysis.