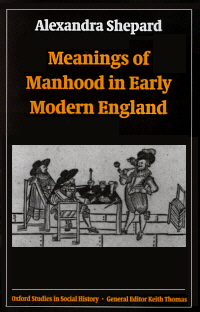 The article 'the' was not accidentally left off the beginning of this title. Shepard's implicit view is that there may be many more meanings of being a man in early modern England than she has thought to take up. Her purpose and her achievement are to call into question the assumption that all adult males were included under the benefits of the widely articulated patriarchal ideology. To be a man was in practice not generally to share in the dominion stereotypically prescribed for heads of households, but rather to be subordinate. Shepard has chosen the chronological limits 1560 to 1640 because of a sufficiency of evidence, to be sure, but also because these years encompass a time of rapid, unsettling demographic change that carried with it, she says, revisions in traditional gender relations. She constructs its documentary base from a range of court records as well as prescriptive literature.

The first of two parts, "Modelling Manhood", presents the ideal, with which we are all familiar. However, "normative manhood was primarily defined through comparison with a broad range of deviant 'others'", and sometimes these deviant comparators were masculine (8-9). Manhood was but a phase, indeed a brief phase, in even an elite lifespan, lasting as little as ten or 15 years or, in the most generous scheme of William Vaughan, as long as 26 years. Boys, youths, and older men of the most privileged classes were excluded from hierarchic eminence. Their bodies had either not yet reached the perfection of mature virility, or they had passed into deepening decrepitude. Temperamentally they were still impetuous and violent, ungoverned by cool reason; or they sank slowly into forgetfulness and senile indulgence. But even in their prime, men ranged from lusty and valiant to effeminate and tender.

Chapter 3, "Models of Manhood" (70-89) extracts from the numerous advice books the principle that marriage was a gateway to full manhood. Alexander Niccholes asserted in A Discourse of Marriage and Wiving (1611) that wedlock reduced men's "wilde and unbridled affections" to "humanity and civility" (74). The latter qualities specifically excluded wife-beating. Yet all authors agreed that women's chief role was to maintain their husbands' authority.

Part II, "The Social Practice of Manhood" (93-253), is the greater contribution of this book. Here we learn a number of the ways in which reality contrasted with the much-proffered paradigm. Young men in their "abbeys" of misrule, technically subordinate to biological and city fathers, maintained their own standards of manliness that departed from the self-control advocated by society. They elevated camaraderie, displays of daring, ritual humiliation of others, drinking, and sexual aggression to a model of their own. In their eyes, excess made them men. Shepard takes issue with Alan Bray's assertion that "same-sex relations between men were ubiquitous" at this time (116). She finds hardly any mention in the Cambridge University court records that constitute one of her major sources - for which near-silence there could be other reasons.

Men policed their own value-systems by means of physical violence. Here Shepard includes judicially imposed penalties along with informal, in-group punishment such as beatings within the household. Men might pull each other by the beard or grab at genitals. Violence with or without official sanction could "demarcate territory [...] regulate and chastise [...] and confer authority on its perpetrators" (150). Defamation, too, was an art form in the jockeying for status, one the courts often took very seriously. Slander threatened women's sexual honor ("whore", "drab", "queen", "jade") and men's economic as well as social standing ("rogue", "knave", "jack", "rascal"). "Men's reputations were most frequently attacked through questioning their economic integrity in terms of plain dealing, reliability, and personal worth" (164). Slurs on one's class standing were abusive. By contrast, sexual allegations affected university men more because they were expected to be chaste as well as celibate.

Effective men, according to convention, were able to support their families. To fail to do so compromised their masculinity. In reality, many wives had no choice but to labor gainfully. Shepard doubts that most married couples saw their work as defined by gender; to survive, all had to be adaptable. Few journeymen attained the rank of master craftsman and thus, together with their families, remained by definition subordinate, dependent, and denied a positive class identity.

The final chapter, "The 'Ancienter Sort'" (214-45), lays out the emasculating consequences of growing old. Yet, when a long memory was needed in order to determine the origin of contracts or the boundaries of a piece of land, old men (not women) of keen mind came briefly to the fore. In general, aging loosened the grip men had on their earlier claims to preeminence. Nevertheless, they were not wholly or rapidly cast to the periphery, maintaining various social and local roles (along with women) such as that of marriage broker. Even reproductive sexuality in older men was not admired, but some ignored community disapproval and continued to engender offspring.

This book, as indicated, is predominately descriptive. Its unifying interpretive theme is that masculinity varied greatly within shifting contexts of age, class, marital status, and economic success. Shepard warns against accepting easy patriarchal oversimplifications. Regrettably, she appears not to be aware of research on her subject carried on by colleagues on the other side of linguistic boundaries, unless their works, perchance, have appeared in English translation. This means that an indispensable collection like Martin Dinges's Hausväter, Priester, Kastraten: Zur Konstruktion von Männlichkeit in Spätmittelalter und Früher Neuzeit with its rich theoretical offerings eludes her. [1] Among others, Gerd Schwerhoff's essay on blasphemy as masculine theatrics could have added to Shepard's chapter on youth culture. [2] Within the Anglophone literature, R.W. Connell's Masculinities is present [3] but not a seminal anthology like Clare Lees's coedited Medieval Masculinities: Regarding Men in the Middle Ages. [4] Dinges's and Lees's books are merely examples of a broad pertinent yet uncited literature. Nonetheless, among treatments of England, this is an admirable, thought-provoking study of a timely subject. Scholars who concentrate on other language areas and eras will also take note of it.

[4] Clare A. Lees (ed. with the assistance of Thelma Fenster and Jo Ann McNamara): Medieval Masculinities: Regarding Men in the Middle Ages, Minneapolis 1994.