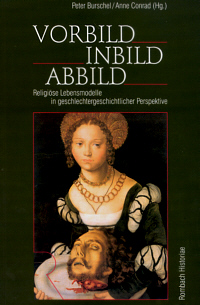 Waltraud Pulz takes up again the popular topic of a few devout women's abstinence from food and drink as an aspect of the imitatio Christi. Echoing André Vauchez and Caroline Walker Bynum, Pulz describes this as the somatization of spiritual experience. The women recalled thereby not only Christ's 40 days' fast in the wilderness but his Passion. They continued the ascetic mysticism of earlier models, of which at least some were aware. The novelty of this essay lies in its tying this phenomenon of abstinence to Protestant as well as Catholic culture, in a later period than it has been associated with up till now; its using pamphlet and broadsheet sources including the illustrations; and in broadening the corporeal manifestations of devotion to fit within the attitude toward marvels as communications from God. Even the not-yet-rebellious Martin Luther visited the Augsburger Anna Laminit, who allegedly ate nothing at all, on his way back to Wittenberg from Rome. Lutheran and Reformed divines tended to associate such departures from the normal order as signs of the women's diabolical affiliations. But Catholic authorities, too, were watchful for mere pretense of sanctity. Pulz does not cite Anne Jacobson Schutte's recent book on this subject. [1] She shares of the view of Rudolph Bell, among others, that abstinence lent its practitioners a degree of control over their own lives and a prominence that they could not otherwise have commanded. [2]

Anke Dörner describes how Celio Secondo Curione and Theodore Beza constructed a paragon of Reformed womanhood out of the autobiographical writings, letters, and poetry of the Ferrarese child-prodigy, humanist, and court lady Olympia Fulvia Morata. Morata converted to Calvinism, married the German physician Andreas Grundler, and moved to Germany. Whereas the roles of court dame and mistress of Latin and Greek had colored her earlier self-image, she saw her 1548 conversion as the intervention of God in her life. Now she labored to bridge the apparent chasm between her activities as a scholar and her status as a pious wife and head of household. She continued to forge her personal transition up until her premature death in 1555. Curione and Beza, however, deliberately overlooked her learned past, her conversion, and her efforts to convert her family in their pious depictions of her for their own propagandistic purposes. Yet the more complex woman could still be found in the editions of her works that appeared. In them she remained exceptional, not just for her submissive Christian womanhood.

On the Catholic side, the Portuguese princess Maria, who married Alessandro Farnese in 1564, filled a similar need. Although Catholic saints continued to provide their inspiring examples, there was always room for superior models drawn from the high-ranking, non-canonized laity. Xenia von Tippelskirch examines the biography published by the Jesuit Father Sebastiao Moraes, Maria's confessor, the year after her death. It was reprinted at least 16 times through 1612, and it was translated into several vernacular languages. Maria's extraordinary piety served the goals of the post-Tridentine Catholic Church, to be sure, but it also fostered the ambitions of the Farnese family. She was to serve as a mediatrix between God and the people of Parma and Piacenza; the ruling house had divine connections. Initially Maria's Vita was conceived of as women's literature; but soon it was promoted as suitable for every pious Catholic. The image of her spiritual perfection was disseminated much beyond Italy.

Nicole Grochowina takes up the 1562 Anabaptist martyrology, Het Offer des Heeren. Here were collected inspiring accounts of nonconforming Christians who had experienced the depths of suffering rather than deviate from their convictions. Altered in subsequent editions, the printing of 1570 contains materials on 19 men and four women, followed by a section of hymns in which 90 men and 41 women appear. Grochowina closely examines the segments about women. In numerous respects, all the evidence bears witness to Anabaptists' sharing the gender definitions of their contemporaries. Men leave us their declarations on theology, and they admonish their fellow believers. Women, in conformity with prevalent values, write letters to family members, admonishing their children to fidelity to the faith and to love for one another and their neighbors. The women refer to themselves as weak and uncomplicated. They express emotion and refer to weeping. Anabaptist women and men, although drinking from one chalice and bearing the same cross of martyrdom, upheld the fundamental gender hierarchy of their day.

Moving forward in time, Anne Conrad depicts the early Romantic religious convictions of the circle around Schleiermacher, which included people like Friedrich Schlegel, Dorothea Veit, and Schleiermacher's own close friend Henrietta Herz. These could no longer accept the precepts of their ancestors but sought doctrines compatible with their own age. Early in adulthood, for example, Schleiermacher had rejected the doctrine of the atonement. He came to regard love, including sexual love, as a key to the "infinite" and "universal," which lay at the core of the Divine. Through love, human beings and the Divine came together. Whereas this idea could have led to a gender-free androgyny, Schleiermacher and Schlegel continued to envision inborn differences between the sexes, between masculinity and feminity. Conrad looks particularly at Schleiermacher's Katechismusfragment with its "ten commandments." Nevertheless, their outlook - and certainly the manner in which they and their partners lived in these early Berlin years - embodied an intense individuality that pointed to the future.

Marion Kobelt-Groch describes men's erotic attraction to "horrific women," in the nineteenth century. Beginning with King Ludwig I of Bavaria and his beloved tormenter Lola Montez, the author backs up briefly for purposes of deconstructing the popularity of the early modern image of Phyllis, Alexander the Great's mythical mistress, often shown naked and wielding a crop, riding on the back of Aristotle. In the latter half of the essay, she examines the fantasy life of Leopold von Sacher-Masoch. Although this eponymous masochist did not mention the biblical Judith by name, in his writings, especially in Lieutnant Holofernes and Die Judith von Bialopol, 1675, "the decapitation of Holofernes becomes an intoxicating ideal of masochistic yearning, a fantastic dream that is dreamed amid the foliage of a Florentine garden" (195). [3] Sacher-Masoch does not follow the scriptural outlines of Judith's virginal and devout character, for such a figure would hardly embody his vision. Rather, he converts the virtuous sword-wielder for God into "that murderous, ferocious woman [...] that in his work he repeatedly conjured" (202-203). [4] Kobelt-Groch thinks it very possible that he drew upon the story of Hille Feicken, the "Judith of Münster" during the 1534-1535 Anabaptist regimen there.

Each of these essays in its different way draws us into past mentalities. The first four share an anchoring in a period of intense skepticism toward female self-assertion and individuality. The latter two concentrate on what are, at least in terms of numbers, virtually idiosyncratic ways of viewing relations between the sexes. The inclusion of essays treating the seventeenth and eighteenth centuries might have made the volume cohere better. Nevertheless, the quality of this collection, as it stands, is uniformly high.