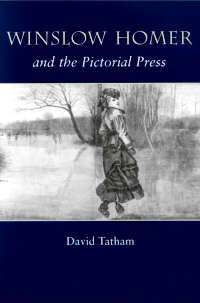 Winslow Homer ranks among the giants in the history of American art. Active as a painter from the 1860s up to his death, he is said to have influenced several generations of American twentiethcentury artists, including Edward Hopper, Marsden Hartley, and Jackson Pollock. Homer's early paintings are reminiscent of European realism in the style of Courbet or Manet. His outdoor scenes of fashionable ladies and gentlemen playing croquet bear resemblance to Monet's garden parties. At mid-career, Homer's work took on darker themes: a dramatic rescue scene after a shipwreck; fishermen lost at sea; hunters killing a deer by drowning it; and so on. During the last two decades of his life, Homer sought the seclusion of his home in Prout's Neck, Maine, a remote area near rugged Atlantic Ocean shore. His late seascapes, all painted near Prout's Neck, are breathtaking and sublime. Dividing into bands of white, gray, orange, blue, and green, these canvases verge on purely abstract painting.

Before he launched his career as painter, Homer had a prolific career as graphic artist, illustrating books and pictorial magazines. Following his study "Winslow Homer and the Illustrated Book", David Tatham, professor emeritus of fine arts at Syracuse University, has now devoted a book to Homer's magazine illustrations. [1] Estimated to be more than two hundred, Homer provided the drawings for woodblock prints that appeared in magazines such as the short-lived "Ballou's Pictorial Drawing-Room Companion" and the now legendary "Harper's Weekly" and reached thousands of readers.

Do the drawings that Homer produced for the growing American magazine market contain clues that could elucidate his later more enigmatic paintings? According to Tatham, this line of inquiry has distorted the understanding of Homer's graphic work in past scholarship. Rather, he argues, we need to investigate this body of work on its own terms. As tempting as it is to read these illustrations as preliminary studies for paintings, they were produced within a specific context, the history of the illustrated magazine. Aesthetically, too, these works deserve to be studied closely and within their own medium. Within the pictorial press, which attracted many talented illustrators, Homer established himself as a superb draftsman with a distinct style.

Through chronologically organized chapters, Tatham traces the development of Homer's drawing style from about 1857, when his first illustration in "Companion" is documented, until 1875 when his last woodblock print appeared in "Harper's Bazar". Demonstrating his connoisseurship, the author carefully analyzes selected prints and relates them to other works in Homer's oeuvre. He does this effectively, for instance, in a comparison between the Civil War illustration 'Army of the Potomac - A Sharpshooter on Picket Duty' ("Harper's Weekly", November 15, 1862) and an oil painting of the same subject, 'Sharpshooter' (Portland Museum of Art, Portland, Maine). We learn that the painting preceded the illustration but was not exhibited publicly until 1863. Both images portray a Union sharpshooter sitting high up in a tree, hiding within the foliage, his rifle directed toward a target outside the picture. Tatham explains that both images were original and distinct within their own medium - light and dark contrast, in one case, color in the other. According to Tatham, there is logic to determining the chronological sequence: The illustration was usually the end product of experimentation in oil or watercolor. Indeed, beginning in the 1860s, Homer's works in the world of illustration and the world of painting overlapped and mingled. In the early 1870s, when Homer added watercolor to his repertoire, he often explored one scene in a number of variations and within different media.

Tatham helps the reader appreciate Homer's skills by relating his illustrations to the pictorial arts in general. The illustrated magazine was part of an emerging industry in America. Thus, we encounter Homer as a contemporary of the famous lithographic team Currier & Ives that flooded the market with hand-colored lithographic prints of historical and contemporary subjects. Perhaps the most enduring legacy of Currier & Ives is the image of an abundant rural America duplicated in many harvest and domestic scenes. Homer's drawings, such as his 'Thanksgiving Day - The Dinner' ("Harper's Weekly", November 27, 1858) come close to the "manner and spirit of Currier & Ives," but, as Tatham insists, they remain "more individualized ... more sharply pointed in their details, and altogether more dynamic, energized not only by the activities depicted but also by the rhythmic march of light and shade across the composition" (76). Within a medium that left only limited room for artistic individuality, Homer quickly established himself as an innovator.

What this comparison highlights is the conflict between a production system that favors efficiency and control over artistic freedom. Tatham alludes to this issue but mostly leaves the reader guessing how it affected Homer. For instance, Homer drew a number of scenes of urban poverty and conflict. In one, 'Scene on the Back Bay Lands, Boston' ("Ballou's Pictorial Drawing-Room Companion", May 21, 1859), he depicted lower class people digging through earth used as landfill for the expansion of Boston. Such images of lower class life were rare in Homer's oeuvre, and this rarity makes the reader wonder if this was a subject of Homer's choice, why he did not do more of them, and why he did them at all. What sorts of pressures if any did he receive from his editors to go with safer subjects? Tatham resolves the conflict by casting Homer as an "unusually observant artist-reporter" (51). In other words, Homer, the illustrator, could be both a distant documentary observer and render his images with great emotional charge. Whether or not one agrees with Tatham on this issue, this much is clear: Homer was one of the best-paid graphic artists of his time, supporting his early painting career with his income from illustrations. Most likely, his editors granted him a great degree of freedom in choosing and rendering the subjects for his drawings.

Homer was a voracious observer, for sure. Whether his work had greater emotional resonance than that of his fellow illustrators is debatable. One could equally argue that the observing eye that produced illustrations during the Civil War and into the post-Civil War era, known as Reconstruction, was distant and cold. His images of blacks, a subject that Tatham virtually ignores, are a case in point. Homer is sometimes given credit for portraying African-Americans more sensitively than other artists. However, there are just as many images in Homer's oeuvre that reproduce stereotypical views of blacks existent both North and South. If one surveys Homer's output in the print medium as well as oil paintings a subtle difference in the portrayal of blacks seems to emerge. While both media were mostly consumed by audiences in the urban Northeast, the prints appealed to a popular market and were more stereotypical. His canvases, on the other hand, were painted for affluent patrons who held more "enlightened" views of African-Americans. Thus Homer carefully calibrated his views on a potentially divisive subject. Although it deliberately limits itself to the print medium, Tatham's study could have benefited from a more rigorous comparison between different media and their markets.

Besides the Civil War, Homer's observing eye recorded social scenes from an American Northeast that was entering a new phase of expansion and industrialization. He rarely drew scenes from working class life, such as 'New England Factory Life -"Bell Time"' ("Harper's Weekly", July 25, 1868), a depiction of industrial laborers - men and women, young and old - walking toward the Washington Mill, one of many textile mills in Massachusetts. Far more frequently, Homer devoted his illustrative talents to recording leisure activities shared by both men and women such as horseback riding, croquet games, skating, and fishing. These scenes stand apart from his images of the exclusively male pursuit of hunting.

Fashion, the sign system of modern bourgeois life, preoccupied much of Homer's attention for several years. Indeed, so prevalent are these fashionably dressed young men and women that Tatham devotes an entire chapter to the subject. The few drawings that Homer brought or sent back to the United States from an extended trip to Paris in 1867 focus on fashion. For several more years, Homer presented fashionable young people visiting popular summer spots along the East Coast to the readers of several new weekly magazines, including "Harper's Bazar" and "Every Saturday". Tatham argues that Homer supplied magazines with these fashion plates, because he needed money to support himself. One is tempted to imagine Homer leading the fashionable life himself. Historic photographs show a man who dressed meticulously and clearly cared about his appearance. Besides, he was renting expensive studio space in New York. Yet, this phase of Homer's production seems to call for a more in-depth discussion of consumer habits in post-Civil War American society and the significance of fashion for class and gender identification. In a similar manner Tatham's book avoids drawing any psychological or other analytical insights from Homer's numerous renditions of children, usually engaged in outdoor activities. At this stage in his career one wonders why Homer is obsessively drawn to children at play. Although they are not as repetitive as Degas' dancers, Homer's children pose intriguing questions of voyeurism and gaze.

In sum, "Winslow Homer and the Pictorial Press" is a welcome and important addition to Homer scholarship. Its most valuable contribution lies in the early chapters that introduce a very gifted artist coming of age in an era of mechanical reproduction. Tatham offers a concise discussion of international developments in print technique and magazine consumption. Still, far more could be done with this larger transformation in the public sphere and the visual information that artists like Homer supplied. Although some recent publications on Homer and the public sphere, such as Conrads' "Winslow Homer and the Critics", are listed in the bibliography, Tatham's text is regrettably void of critical debate. [2] Thus, Sarah Burns' discussion of Homer and gilded age ideals of masculinity is absent. [3]

"Winslow Homer and the Pictorial Press" is a well-crafted story by a senior scholar who over the course of his career wrote a dissertation, articles, and books on the artist. While the book's modest analytical goals are regrettable, its strict adherence to sound empirical method may be its greatest virtue.