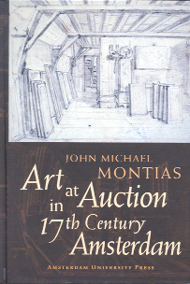 John Michael Montias published his most inspiring books and articles on the socio-economic factors on style and the market for paintings in the 17th century between 1982 and 1995. As prime examples of interdisciplinary research, some of these publications are still considered major breakthroughs by many art historians. It is no exaggeration to say that they changed the way we look at the function 17th-century paintings had in society, treating them as any other tradable commodity. In recent publications Montias has concentrated his research on the art market in Amsterdam.

In the introduction of Montias's "Art at Auction in 17th-century Amsterdam" the author clearly states what he sets out to do. When markets became fairly developed, auctions of luxury goods such as artworks emerged. Montias proposes that these auctions played a significant role in making a market for paintings. This gratifies profound analyses of the notebooks of the auction records conducted by the Orphan Chamber of Amsterdam dating from 1597 to 1638, which contain brief bare-bone descriptions of the goods together with the names of most people that bought them. These books are a virtually unique record of the (second-hand) prices that were actually paid for works of art. In the first part of the book, Montias apprehends these notebooks from a macro economic perspective. He studies the way auctions were organised and conducted, the wealth of owners and buyers, the subjects of works of art sold, the artists to which they were attributed and their prices. In the second part of the book, the author descends into a micro economic perspective. He considers auctions as a social occasion and proposes that many of the buyers were in some way related to the deceased or to each other. Furthermore, he brings together "some anecdotal evidence about a few buyers that may throw at least a slanting light on their 'mentalités'" (13).

The auctions of the Orphan Chamber and the executive sales of the so-called 'Desolate Boedelkamer' (Bankruptcy chamber) were attended by a broad public. Of the buyers, a large percentage were professionals, art dealers, artists and 'uitdraegsters' (women who sold second hand goods). The majority of the private buyers were highly skilled craftsmen, well-to-do merchants and people from the liberal professions. Their occupational status was, on average, higher than that of the owners. In general, works of art were sold during these sales for relatively modest prices (less than fl. 12:0). The sample is biased towards the lower end of the market, because art lovers may have bought some paintings in auctions, but they preferred direct purchases from artists or contacts with art dealers.

The first successful specialised sale of works of art was held on March 1, 1607 when the estate of the landscape painter Gillis van Conincxloo was auctioned. The records show that the majority of the buyers were of South Netherlandish origin. In chapter 5 Montias concludes that from 1597 to 1620 a larger percentage of buyers than might have been expected originated in the Southern Netherlands. This prompts the first of his many tentative conclusions, namely that immigrants from the South played a dominant role in the gradual ascent of Orphan Chamber sales from a local phenomenon to a major Amsterdam institution and that they acted as pace-setters (and perhaps taste-makers) for the Amsterdam-born buyers predominating after 1620. The words "tentative conclusion" appear frequently in this publication, too many times to my taste. It is the consequence of the fact that, in spite of so many data, Montias has little evidence to support some of his most daring conclusions. The following serves as an example: the descriptions of paintings sold at auctions of the Orphan Chamber are usually rather vague. They do not provide us with information about the quality of the execution or measurements. Nonetheless, Montias concludes that the drop of the prices of paintings sold between 1620 and 1638, compared to the period 1597-1619, resulted (at least in part) from the changes in technique that reduced the costs of production. The auction records do not offer enough information to support this assumption. The author fails to mention the other factors that could have been the reason for this drop of the prices. In addition, his conclusion suggests that the majority of the paintings in these auctions were contemporary works of art, which might not have necessarily been the case.

Montias is at his best in the first part of the book when analysing the huge amount of data from the notebooks. As always, he is meticulous in the justification of his methods and thorough in the presentation of his findings. Unfortunately, his conclusions somehow seem to drown in these facts and figures. Moreover, as in many of Montias's publications on inventories, works of art are singled out from the rest of the goods in the estate. Although the author promises in the first chapter to relate the percentage value of works of art to the total value of the estate, he does not entirely honour his promise. The book would have gained in significance by more information about the correlation between paintings and the character of the other luxury goods in these estates. This would have offered a much more compelling insight into the nature of 'art collecting' during the first half of the 17th century than Montias's accounts of the taxes these families had to pay.

The chapters in the second part of the book may add some 'couleur locale', but in fact contribute little to the main subject. Montias gives detailed accounts of the lives of several buyers at auctions. In my opinion, his extensive citations of family names and other data from archival records does not add anything to the first part of the book or shed any light on the reasons why these particular people bought at these auctions. Fortunately, the main conclusions drawn on the source material are summed-up at the end of some chapters, but the author neglects to do this in other chapters, adding to the general structural inconsistency of the entire work.

Another shortcoming of the book is that buyers of paintings such as Paulus Bisschop are discussed in several different chapters using the material more or less to the same ends. This does not contribute to the general coherence of the book. Moreover, the writer does not succeed in giving these people a face because his account of their lives does not proceed beyond complicated family relations and business transactions. In my view, one of the major shortcomings of the book is that some of the chapters in the second part seem to be dragged in by the head and shoulders; the only reason for the tedious account of archival records being the fact that someone once bought a painting at an Orphan Chamber sale. In Montias's longish account of the tulpomenia and the clash between remonstrants and counterremonstrants we have to struggle through tedious introductions with a lot of names and dates that leave us guessing about the relevance of all this information to the general subject of the book.

Sometimes Montias even bends the interpretation of his material to suit his theory. This may be the consequence of the fact that he is an economist and not a historian, which makes him overlook the danger of rash conclusions on the basis of ambiguous sources without knowing too much about their context. To name but one example, Montias states that the sugar refiner Jan Thivaert was also an art dealer who contracted artists to provide him with paintings (127). He concludes this from the fact that Thivaert provided the Utrecht painter Roelandt Savery with seven panels for a series of paintings. However, many art collectors were in the habit of supplying materials in case of special commissions. In this context Montias's interpretation of this source is probable but by no means a certainty.

To conclude this review, I must add that the notes, the bibliography and appendices - all of which invite the reader to do further research on the subject - did impress me. The database that resulted from Montias's investigations is available at the Frick Library, New York, and will be in the future through the RKD: the Rijksbureau voor Kunsthistorische Documentatie in The Hague.